2017-08-25
Polish version
ENGEL has been named as one of the most family-friendly companies in Austria. The accolade was awarded to the manufacturer of injection-moulding machines by Woman magazine. In cooperation with the statistics portal Statista and the employer rating platform Kununu, the magazine analysed employee ratings and published a list of the 200 most family-friendly companies throughout Austria.

The rating criteria included the willingness of employees to recommend their employer for its family-friendly approach and how they rated such things as working time arrangements, pay and career, as well as the ability to combine family and working life.

Returning to a position of responsibility after parental leave

A year ago, ENGEL opened its own childcare centre for younger children at its headquarters in Schwertberg, Upper Austria. But that is only one of many aspects of ENGEL’s family-friendly approach that its employees rate highly. “People today rightly expect such a major company as ENGEL to do a lot to make it easier to combine work and family life,” says Carina Grossalber, Head of Recruiting and Recruitment Marketing at ENGEL. Besides the childcare centre, this primarily includes flexible work models. The machine manufacturer also offers flexitime in certain areas of its production. “A family-friendly workplace is not only important for the women in a company,” Grossalber is keen to point out. “At ENGEL, the men also benefit from the provisions made for families.”

Achieving balance between family and a career also relates to issues such as returning to work after parental leave to a position that corresponds to an individual’s strengths and skills, as well as it also being possible for managers and executives to work part time. “Automatically dropping back down the career ladder after parental leave is not appropriate in this day and age,” explains Carina Grossalber. “Of course, we have to reconcile the needs of our employees with the organisational conditions, but there is a growing number of positive examples, win-win situations from which both the employees and the company benefit.”

For those who want to return to full-time work soon after becoming a parent, childcare for younger children is another provision that makes it easier for them to do so. At its sites in St. Valentin and Dietach, ENGEL works with local nurseries to provide these services. The on-site childcare centre in Schwertberg opened in September of last year, initially with twelve children. In response to the great demand, a second group for another twelve infants will open in the autumn of this year. With the exception of the annual plant holiday, the Schwertberg childcare centre stays open all year round, because parents often struggle with the lengthy vacation periods taken by many public institutions. To help cover the school holidays, too, ENGEL organises an annual summer camp for its employees’ older children between the ages of 6 and 14, which receives financial support from the Works Council. Demand is growing from year to year. Recent holiday provision was used by eighty children. 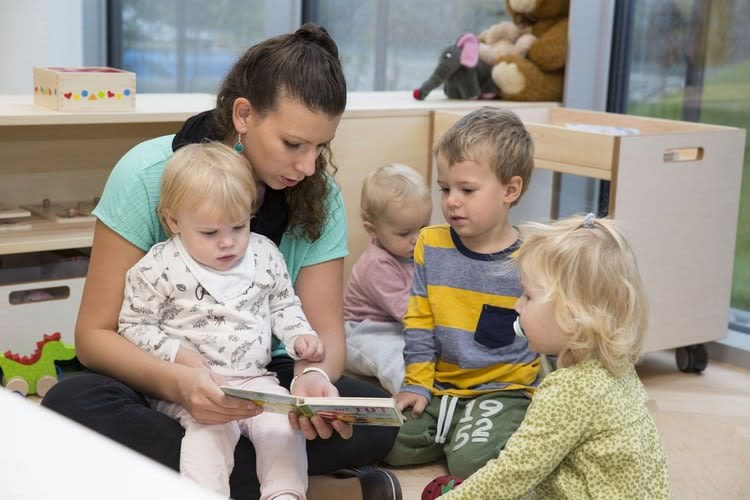