2009-11-17
Tweet
Giant extrusion lines
Klaus Kapfer, General Manager of Coperion’s polyolefins compounding systems business unit, discussed developments in extruder lines for latest mega-plants for PP and HDPE. He said that in the last 15 years of the last century, maximum operating capacities for single-train polyethylene plants more than quadrupled, while for polypropylene they were well over five times higher. With increased output has come increased reliability, as operating experience has grown.

It seems that the confidence of the plant developers has increased even more, because the growth rate, at least for polyethylene plants, has taken off in the first years of this century, with 600,000 tonne/yr plants six times bigger than the largest ones in operation in 1985. And by 2013, plants producing 750,000 tonnes/yr should be running. 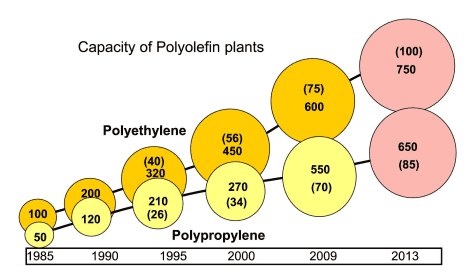 PO plants continue to get bigger (Source Coperion).
Note: Numbers in bubbles are plant capacities in thousands of tonnes/yr and (in parentheses) tonnes/h.

Littmann said the autoclave is a well established process with significant potential for further improvements, and because there are many similarities between Lupotech A and Lupotech T, recent Lupotech T advances are a solid basis for further Lupotech A developments.

“Novolen Technology: Flexible Approach to Satisfy Present and Future Market Requirements,” was the title of a presentation by Lummus Novolen Technology’s Director of Technology, Franz Langhauser. Novolen, a twin-reactor PP technology, is flexible in several ways, one of which being that reactors can be run in cascade or parallel according to requirements, enabling wide variations in output as well as polymer type. All sorts of co- and terpolymers are achievable, as well as very broad variations in molecular weight distribution.

Solving anti-oxidant issues
A session on additives included presentations on stabilizers, clarifiers and mineral modifiers. Klauss Keck-Antoine, Executive Officer, Global Application and Tech Services with Songwon Industrial, spoke about replacement of Trisnonylphenol Phosphite (TNPP) as a stabilizer in PE, and about if and where it is necessary and/or recommended. There are no restrictions on its use, but NP & derivates can potentially be formed from TNPP, and use of some of these is restricted.

Keck-Antoine showed that various phosphites can achieve better LLDPE quality than TNPP. He will give a follow-up presentation, illustrating a complete technical and commercial assessment of the issues, at the MBS conference Dubai Plast Pro 2010 next March.

Keck-Antoine’s views on TNPP were backed up by Jonathan Hill, Technology Director at Chemtura Manufacturing. Phosphites are by far the most effective class of secondary antioxidant hydroperoxide decomposers, he noted. Chemtura has introduced a new “next generation” liquid phosphite, Weston 705, which is structurally similar to an existing solid grade, Alkanox 240. Customer benefits include high performance and ease of use; improved durability and surface qualities of finished articles; improved processibility; and, last but not least, low cost.

PEPP, a unique event in the polyolefins supply chain calendar, is organized by Maack Business Services, which has been organizing conferences for the plastics industry for over 25 years. It is supported by chemicals intelligence company SRI Consulting, part of Access Intelligence. PEPP 2010 will be held in Zurich on June 14/15 2010.