Know-how for smartphones made from metal and LSR

2018-06-28
German version Polish version
The 3C sector (communication, computer, consumer electronics) plays a significant role in Taiwan. As a pioneer in the processing of liquid silicone (LSR) and in powder injection moulding (PIM), Arburg will be showing two applications for the smartphone market at the Taipei Plas 2018 in Taiwan from 15 to 19 August: on exhibition stand I0808 in hall 1F an Allrounder from the electric Golden Electric series produces smartphone frames made of metal using the PIM process. The second exhibit, a hydraulic Allrounder from the Golden Edition series, will produce flexible LSR covers. In addition, the Arburg host computer system (ALS) will be on view, demonstrating how process data can be logged, archived and traced end-to-end.

"We have had our own subsidiary in Taiwan for two years now and have clearly exceeded our ambitious goals," says Michael Huang, Managing Director of Arburg Taiwan. "Our highly motivated team will present two innovative and production-efficient applications for the processing of metal powder and liquid silicone to trade fair visitors this year. We are demonstrating the efficient manufacturing of PIM and LSR components for Taiwan's very strong 3C industry, especially the booming smartphone market."

The injection moulding of metal powders (MIM) is a cost-effective alternative to the machining of metal frames and backs for smartphones. This method requires a much lower use of materials and is significantly less expensive than machining. At the Taipei Plas 2018, Arburg will demonstrate the powder-injection moulding of tension- and segregation-free, thin-walled smartphone frames made from metal. The associated changeable mould is designed so that it can alternatively be used to produce backs for smartphone housings, as well as frames. An electric Allrounder 470 E Golden Electric with PIM equipment and a clamping force of 1,000 kN is used. The injection moulding machine processes the flow-optimised Catamold 17-4 PH Plus feedstock from BASF and the cycle time is around 60 seconds. In order to maintain consistent green density, the mould is dynamically temperature controlled with a hot runner. This produces very good surface finishes, which can subsequently be polished to a high gloss. A linear Multilift Select robotic system gently removes the moulded green compacts and sets them down.

As a pioneer in powder injection moulding, Arburg has more than 55 years of experience in this sector and has produced far in excess of 1,000 PIM machines for a broad range of applications and industries in the market, including the automotive, jewellery and watch industries, as well as the IT and dental sectors. The company's expertise ranges from feedstock preparation and the complex manufacturing of micro-PIM parts through to cost-effective component assembly integration and the design and implementation of complete turnkey systems. Furthermore, all upstream and downstream production steps such as material preparation, debinding, sintering and part analyses can also be tested under practical conditions. 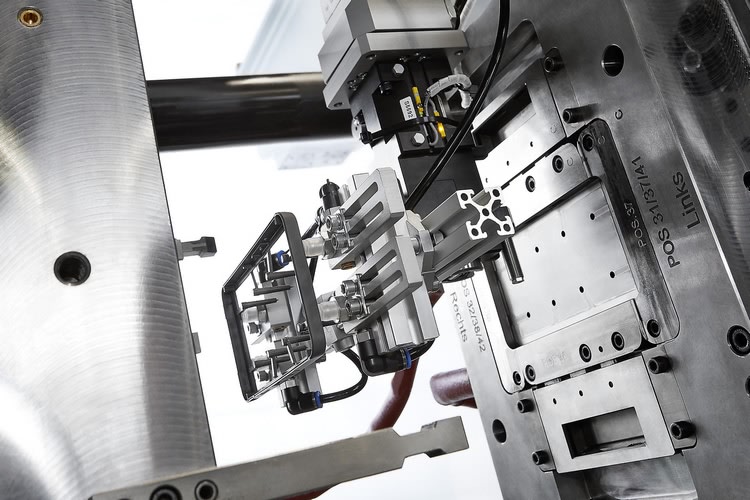