Wacker will be presenting a new flame-retardant solid silicone rubber for the rail industry at K 2019, the 21st International Trade Fair for Plastics and Rubber. Elastosil R 771 meets the fire-safety codes applicable for all rolling stock in the European Union since 2018. The new solid silicone enables manufacturers to produce rolling-stock components compliant with the R1 requirement set of the European fire-safety standard EN 45545-2. Because silicones are inherently fire-resistant and generate no toxic soot when there is a fire, they are also suitable for applications in public buildings. The K 2019 plastics show takes place in Düsseldorf, Germany, from October 16 to 23.

Fire safety in rolling stock has long been governed by national standards. With the EN 45545-2 standard in effect and mandatory across Europe since 2018, the safety requirements that manufacturers of rolling-stock components must meet have become even stricter.

Now, to allow manufacturers to produce large-format bellows and profiles in compliance with the new fire-safety codes, the Munich-based chemical group has added an additional grade of flame-retardant solid silicone rubber to its product portfolio. Elastosil R 771 meets today’s fire-safety codes and enables the manufacture of rolling-stock components in accordance with the R1 requirement set. This makes Wacker one of the first silicone producers able to offer a certified silicone rubber compound approved for the new standard. 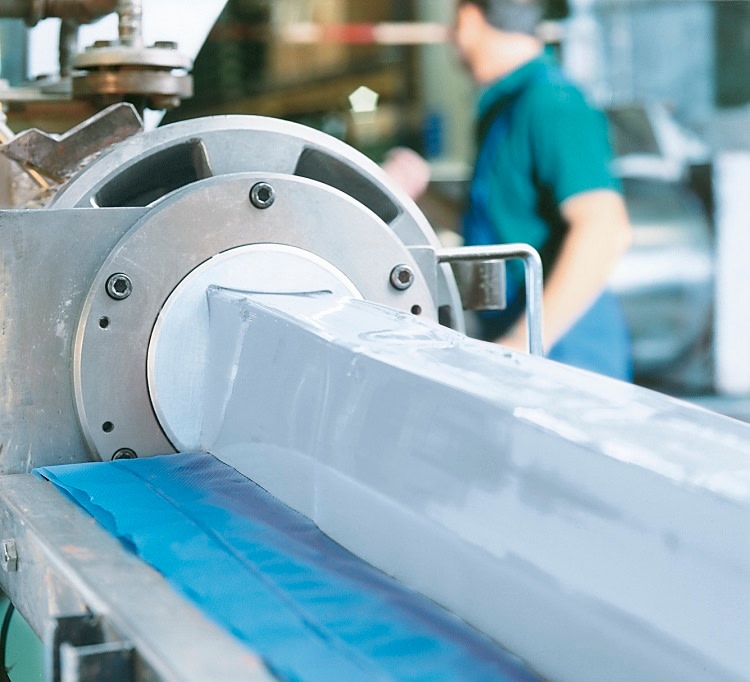 Wacker, the Munich-based chemical group, will be presenting a new flame-retardant solid silicone rubber for the rail industry at the K 2019 plastics show. Elastosil R 771 was developed to meet the new mandatory European fire-safety codes in effect for rail rolling stock since 2018. (Photo: Wacker)

Silicone elastomers have a built-in advantage in that they are flame-resistant and generate little smoke in a fire. They are also halogen-free. As a result, silicones emit no hydrogen chloride when they do burn, which is why smoke from silicones contains significantly fewer toxic substances than smoke from other materials. This property called “smoke toxicity” is increasingly gaining in importance, and silicones can deliver maximum safety in this respect.

In the development of Elastosil R 771, the minimum goal set by Wacker was to meet hazard level 2 (“HL2”). Fire hazard levels are derived from the operating and construction class and range from HL1, the lowest hazard level, to HL3, which is subject to the strictest safety regulations. Components made from Elastosil R 771 meet HL2 for the R1 requirement set. This is sufficient for most of the applications in rolling stock.

EU fire-safety codes are also being increasingly applied in public buildings. That makes Elastosil products suitable for a variety of applications in this area as well. Because silicones produce significantly less smoke in a fire and, unlike halogenated plastics, also will not generate the harmful gas hydrogen chloride, Elastosil R 771 is also especially suitable for use in parts of buildings that are highly exposed to fires such as fire curtains, insulation, and seals for windows and doors.

Manufacturers of train parts will see no changes when it comes to handling the new silicone rubber. Elastosil R 771 can be molded using all conventional processes, extruded or calendered. It lends itself to the production of elastic molded parts and profiles and of panels, films and fabric-reinforced silicone sheets.