2018-06-27
German version
With its Coperion Production Control Center (CPCC), Coperion offers compounders a clever solution for the control of compounding systems. The CPCC incorporates all the essential functions of a manufacturing execution system (MES), such as company data capture, KPI determination, traceability and order management, and constitutes the interface between the compounding lines and an ERP system. In particular it facilitates overall control of continuous production on multiple production lines. Other key advantages of this smart control system include complete documentation of the production process and the ability to trace the finished product right down to the batches of raw material used. Its use of generally accepted standards makes it easy to integrate into an existing IT infrastructure.

The CPCC consolidates the experience that Coperion has gained while implementing over 150 compounding lines and is tailored precisely to compounders’ requirements. This development enables Coperion to offer its customers an intelligent Industry 4.0/digitalization application that paves the way to smart factories. The first such system will be put into operation in the second half of 2018. 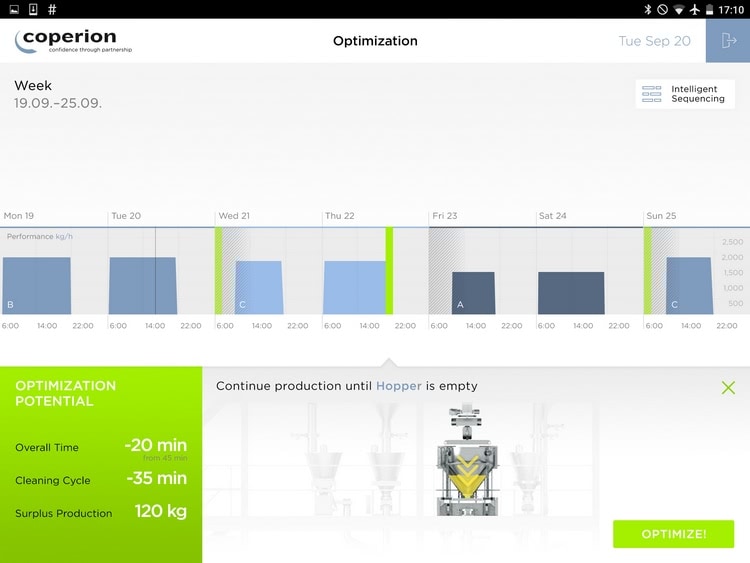 The CPCC automates the key tasks of the production process by connecting to an ERP system. This then sends the CPCC master formulations containing component proportions and batch data for the raw material used. The system uses this data and previously recorded production line parameters to create what are called "production recipe versions" for that production line. It then performs an automated consistency check. These "production recipe versions" include operating and work instructions for compounding line operators.

The CPCC records process data for each filled package produced and sends it to the ERP system. Barcodes make each filled package seamlessly traceable. The ERP system also receives additional information, such as the status of the current production order, and, when a production order is completed, an overview of the raw materials consumed, quantities of finished products and quantities of materials that are not within specification. The CPCC stores all this production and process data in an integrated database and forwards it to a long-term archive.

For remote support and diagnostics, Coperion can connect to the system via a virtual private network (VPN) provided by the customer. Coperion’s ServiceBox, an integrated system for online monitoring and fault detection of systems and components can also be used for these tasks.