Reifenhäuser presented its latest 5-layer blown film line for the production of highly profitable FFS film during Open House at Russian plastics processor KZPM, a specialist manufacturer of polymeric films and flexible industrial packaging. Eugen Friedel, Sales Director at Reifenhäuser Blown Film, says: ''Thanks to the event at KZPM we encountered a wide variety of customers and held intensive and valuable discussions about our line, which is the first of its kind for packaging petrochemicals. As a customized solution for tubular heavy-duty shipping sacks (HDSS), it demonstrates our ability to meet customer demands''.

Reifenhäuser developed this new 5-layer FFS line for the production of plastic heavy-duty shipping sacks. The very first of these lines is now running in full production at KZPM, Kazan. During a recent Open House event, customers benefited from a live demonstration, involving comprehensive process know-how and the practical expertise of Reifenhäuser´s blown film team.

As the only manufacturer of 5-layer FSS lines for this application, we impress with our technology that enables the down-gauging of HDSS films,'' adds Schroeter. Cost savings result due to the thinner skin layers that require less costly resin and additives, and the ability to use cheaper, recycled resin in the core layer.'' Reifenhäuser is able to achieve this thanks to the barrier properties of the sub-skin layer, which prevents the migration of any additives from the core into the skin. The result: more flexibility in film recipes, and improved film properties because of the clean outer layers. 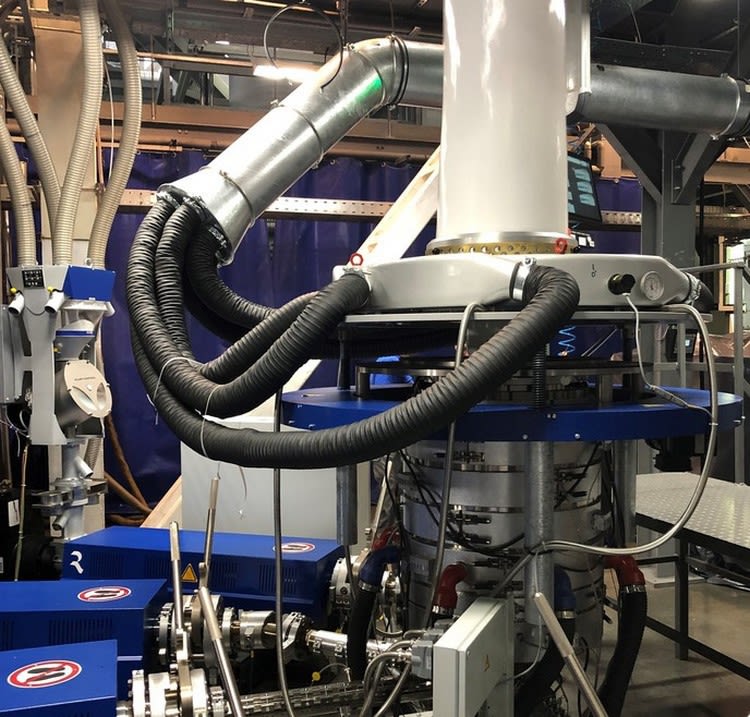 Reifenhäuser developed this new 5-layer FFS line for the production of plastic heavy-duty shipping sacks. This ne is now running in fill production at KZPM, Kazan.

Eugen Friedel is well satisfied with the on-site live demo at KZPM: ''The line achieved an output of 430.5 kg/h of film with a thickness of 125 mm and a profile tolerance of 2,2 % Sigma.''Equally convincing: The strength with a dart drop value of 680 or 5.4 g/µ. ''Values that we only reach with major effort on a 3-layer line. In practice, this means, the market for these sacks is enormous, and there is huge scope for replacing 3-layer lines with 5-layer ones,'' predicts Friedel.