Protection in the deep sea

2013-09-16
Tweet
Sea oil production is becoming increasingly difficult. Companies have to go deeper and deeper to the seabed to find this valuable commodity and technology has to keep pace with these developments. This is why floating platforms are used in addition to the platforms that sit on the seabed. Flexible pipelines are laid instead of rigid steel pipelines. These pipelines have to be protected on the outside against corrosion through seawater and on the inside against corrosion from oil, gas, and water. And the deeper the producers go, the more important it is to have lightweight pipes as well. This is where Vestamid NRG from Evonik Industries can provide assistance.

The pulley towers 14 meters above the ship's deck. The ship is in the North Sea heading towards Scotland. When they reach the Scottish coast, workers will unwind and lay twelve kilometers of the thick piping. The pipelines will then transport oil from the seabed from a floating platform. As the more readily accessible oil fields in the sea dry up one by one, many oil companies are now pumping oil from the deep oceans through flexible pipelines.

Reliable protection from inside and outside

The flexible pipelines have a shell that is at least six centimeters thick. It consists of at least eight layers. Some of these are steel, others polymer Vestamid NRG. The steel layers are mainly used for reinforcement. The polymer ensures that the pipelines don‘t leak. The material is not affected by saltwater or the chemical compounds in the oil. This is how the inner layer of Vestamid NRG transports the crude oil safely in the up to 350 millimeter thick pipelines. From the outside, another layer of the polymer protects the steel from rusting due to the seawater. Pipes with Vestamid NRG are not only used in the North Sea, but also, for example, off the Brazilian coast, in West Africa, and Australia. 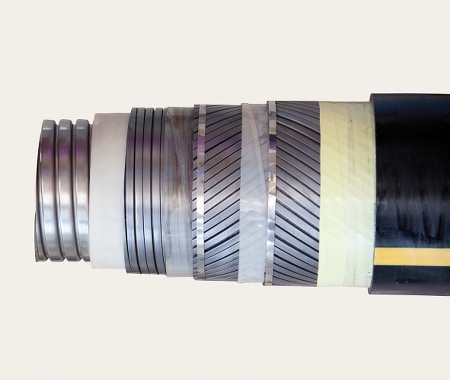 One of the world leaders in specialty chemicals