2017-08-11
David Bradley, President and Chief Executive Officer of Nexeo Solutions stated, "This was a strong quarter for Nexeo as we continued to execute on our strategic plan, delivering true end-to-end solutions that unlock value for suppliers and customers. I am pleased to report strong gross profit growth, which led to our second straight quarter of double digit EBITDA growth. The investments we’ve made in sales force capability and pricing technology, combined with the productivity of our centralized business model, allowed us to differentiate our performance.

"We finalized implementation of our new transportation management system, enhancing our centralized, proprietary operating platform to drive efficiencies and cost savings going forward. We added to our portfolio of value-added customer services by launching our new MyNexeo.com customer portal. In addition, this quarter’s results benefited from the recent acquisition of Ultra Chem, which is on track toward meeting the targets for revenue growth and specialty mix expansion we anticipated. Nexeo’s revenue for the third quarter of fiscal 2017 grew 9% year-over-year to $943 million; we delivered $10 million of net income; and adjusted EBITDA was up 12%. Looking forward, we remain focused on executing our strategic plan and committed to achieving our long-term growth and margin objectives."

Sales and operating revenues for the three months ended June 30, 2017 were $942.7 million, including $17.1 million in revenues from Ultra Chem, and $214.3 million for the three months ended June 30, 2016 for the Successor, and were $650.2 million for the Predecessor period from April 1, 2016 through June 8, 2016. Excluding the impact of Ultra Chem, the increase in revenues was driven by a 6.0% increase in average selling price primarily due to inflation and an increase in volume of 1.0% in the current period. This increase was partially offset by a decline of approximately $6.9 million as a result of the weakening of the exchange rates of various currencies versus the USD as compared to the same period in the prior fiscal year.

Gross profit for the Successor was $102.7 million, or 10.9% and $18.8 million, or 8.8%, for the three months ended June 30, 2017 and June 30, 2016, respectively, and was $75.4 million, or 11.6%, for the Predecessor period from April 1, 2016 through June 8, 2016. The increase in gross profit was driven by the increase in average selling prices across the Chemicals and Plastics lines of business. As compared to the same period in the prior fiscal year, gross profit was negatively affected by the impact of the weakening of the exchange rates of various currencies versus the USD of approximately $0.7 million and additional depreciation expense of approximately $1.4 million due to the step up in fair value of the property, plant and equipment as a result of the merger of W. L. Ross Holding Corp with Nexeo Solutions on June 9, 2016 ("Business Combination"). Gross profit in the current period includes $1.2 million related to the inventory step up as a result of the Ultra Chem acquisition, whereas, the same period in the prior year includes $6.9 million related to half of the inventory step up associated with the Business Combination. Additionally, gross profit was negatively affected during the current quarter by an increase in common carrier transportation costs. 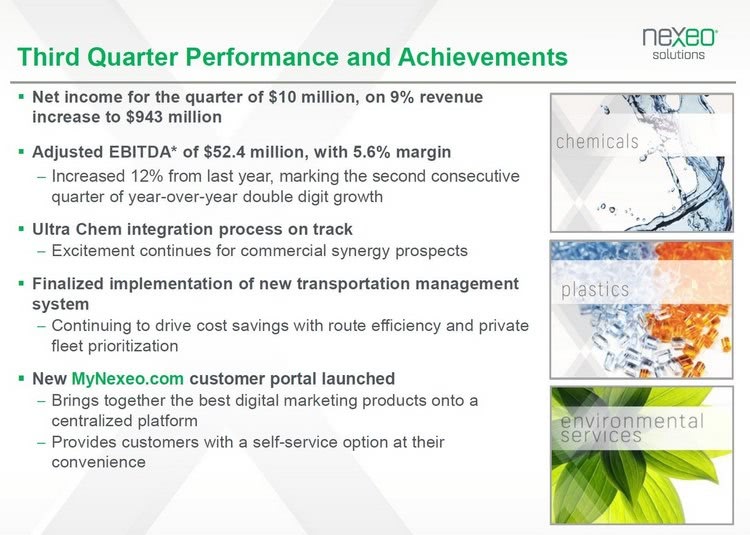