2018-08-23
Polish consumers drink roughly 90 litres of mineral water per capita and year, which places them in Europe’s mid-range category. About half the packaged waters exhibit a low mineralisation, and the other half a high one. Among the latter, Muszynianka can even lay claim to the rank of market leader: the slightly carbonated water from the springs around Muszyna possesses relatively large contents of both magnesium and calcium.

Yet another rather special characteristic of Muszynianka is this: the company avoids discounters and sells its water in the premium price range. “We are Poland’s highest-priced water,” says Managing Board Chairman Ryszard Mosur. The slightly carbonated Muszynianka mineral water, and the Muszynianka Plus brand, which scores highly in terms of its relatively sizable magnesium content, account for about 95 per cent of the production output, with another water that is slightly more carbonated accounting for the remaining five per cent.

In 1991, Muszynianka was filling 1,500 bottles per hour on a small line. Even back then, the cooperative concentrated exclusively on filling mineral water, and in 1997 invested in its first PET line, bought from an Italian manufacturer. In subsequent years, a filler from Poland and pre-owned machines from German suppliers were added to the filling operation, whose output then increased to 5,000 in 2001, and to 12,000 containers an hour in 2003.

2005 marked the company’s breakthrough, both in qualitative and quantitative terms: Muszynianka was the first beverage bottler in Poland to opt for a block layout from Krones, which back then was still a new technology - a Contiform Bloc, incorporated in a complete line rated at 18,000 containers per hour. “That was a huge step forward for us,” says Ryszard Mosur, “and in a way also an experiment. We were really eager to see how it would work out. At that time, a whole lot of other beverage producers flocked to our plant so as to have a close look at this reference line.” His verdict: the experiment was a complete success – and the line is still working today to the client’s complete satisfaction.

Since water extraction from the springs was restricted under the relevant statute law, Muszynianka conducted some explorations for further springs in subsequent years. Today, the mineral water firm obtains its water for bottling from a few dozen springs. Later on, the company started operation in a second, smaller filling plant located two kilometres away in Milik, with the aim of increasing production output. Today, two lines, rated at 10,000 0.6-litre bottles and 12,000 1.5-litre containers an hour respectively, are up and running at this facility. But even these upsized capacities were in the long run unable to meet demand. “Our problem is not sales-related, it’s rather how to satisfy demand, especially in summer,” says the Managing Board Chairman. “At times, we could during the peak season only fill a fifth of the water volume that had been ordered.” 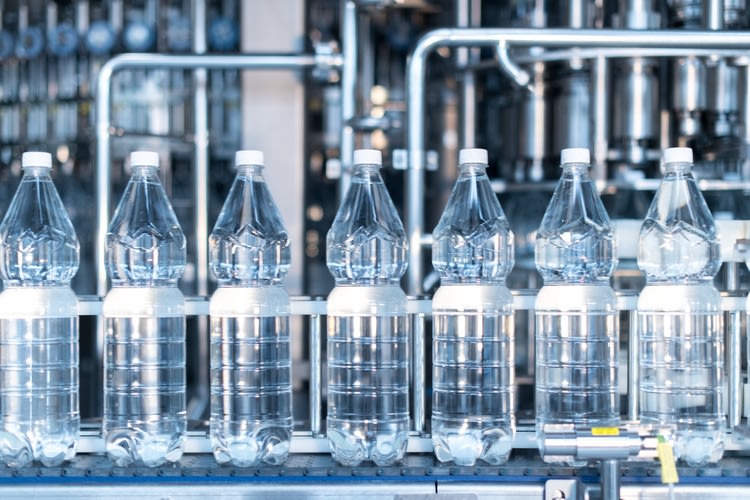 The slightly carbonated Muszynianka mineral water, and the Muszynianka Plus brand, which scores highly in terms of its relatively sizable magnesium content, account for about 95 per cent of the production output.
Read more:
Investments 495
Packagings 995
Consumer products 110
Machines 544
Packaging machines 83
Bottles 228