2017-11-30
CO2-neutral beer? This may at first sound like a utopian flight of inebriated fantasy. But Krones AG is deadly serious. Because the technology conglomerate from the Upper Palatinate has crafted a plan that’s as detailed as it is future-friendly, designed to get a genuinely energy-self-sufficient, CO2-neutral brewery up and running.

Krones’ development team has been progressing the “Brewery of the Future” research project for quite a few months. In September of this year, the concept had finally matured sufficiently to be showcased for the first time to a broadly based and above all keenly interested public at the drinktec, the sector’s premier trade fair.

The issue of energy-efficient brewing is a highly topical one not only for the trade public, but also for consumers, as evidenced last Monday, the 20 November, at the Congress of the German Energy Agency (abbreviated to: dena): following a persuasive pitch from Krones’ Product Manager Dr. Ralph Schneid, the “Brewery of the Future” won the Public Prize of the Energy Efficiency Award. The short list comprised three finalists, chosen by an expert jury in the run-up to the competition. The eventual winner was then determined by live voting during the afternoon at the prize-giving ceremony, after which the award was presented immediately.

Practical implementation of the energy-self-sufficient brewery features several meticulously harmonised technologies. Its key components include:For a beer production volume of 2.6 million hectolitres, the energy-efficient brewery generates an annual surplus totalling 1,534 MWh of heat and 1,066 MWh of electricity, which can be sold on to other customers. The savings in terms of electricity come to 30 per cent in comparison to a standard brewery, and for thermal energy even to around 60 per cent. 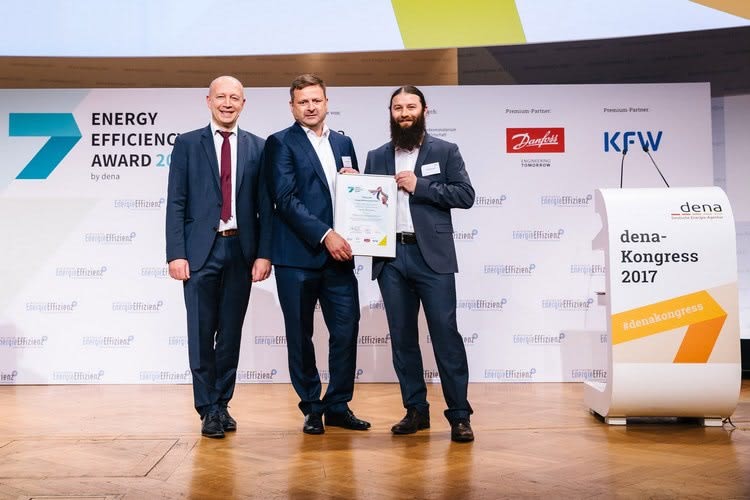