High level of interest at interplastica 2016

2016-02-12
Western technology for the production of packaging and related processes, as well as for the manufacturing of plastic and rubber goods is still highly valued by Russian companies. However, the political framework conditions, the fall of the oil price, and a continually weak rouble, having an inflation rate of approx. 15.8 percent last year, as well as hesitant lending as a result thereof are making it difficult to make investments, especially for small businesses.

On the other hand, there is still considerable investment needed in Russia and neighbouring countries. Above all, the demand has been placed on the domestic consumer goods industry, the food industry, and the packaging industry to optimise production processes and product quality in order to be able to substitute imports. Therefore staying informed concerning innovative technologies, maintaining business relationships with suppliers, or establishing new ones represented the main focus of visitors to the interplastica and the UPAKOVKA/UPAK ITALIA 2016. From 26 to 29 January, 20,900 specialist visitors from Russia and its neighbouring countries came to the Moscow Expocentre in Krasnaya Presnya - around 1,900 more than in 2015. The atmosphere within the halls was remarkably great. The exhibitors reported there being extremely interested business people, who were also, in part, ready to make orders. A total of 828 companies from 38 countries presented their range of offers at both trade fairs.

"Russia is still a potentially significant market currently experiencing difficult times. At the moment, for small and middle-sized Russian companies in particular, it is not easy – the problem of financing planned investments is a quite big. However, the market has in no way come to a halt. There is still a high level of interest in high-quality and innovative machinery, systems, and materials. Companies want to invest and are also making effort to realise planned projects. In such a situation, trade fairs play an important role! With their participation, the exhibitors have provided that they do not only have short-term success in mind, but are making endeavours to sustainably maintain relationships. This was clearly rewarded," commented Matthias Werner Dornscheidt, Chairman and CEO of Messe Düsseldorf. The trade fair company organises both specialist trade fairs, the interplastica and UPAKOVKA/UPAK ITALIA together with its subsidiary, Messe Düsseldorf Moscow OOO, the latter in cooperation with the Italian organiser CPA.

The visitors unanimously expressed positive feedback regarding the versatile range of companies and products, the numerous product debuts, and the presence of many market leaders. Special suppliers and newcomers were also able to be delighted with the lively activity at their trade fair stands.

For German machine manufacturers, Russia is still an interesting sales market, even if figures are currently in decline. During the period from January to November 2015, German export shipments of machinery for processing plastics and rubber to Russia amounted to 118.8 million euros, which is a decrease of 16.7 percent in relation to the same period during the previous year. Despite this decrease in orders, Germany remains the most important supplier in this segment. In 2014 (figures for 2015 are not yet available), the German market share was at 23.9 percent. Italy followed with 12.6, being right ahead of China, whose market share was at 11.6 percent. The world export of plastics and rubber machines to Russia showed an increase of 4.1 percent in 2014 in comparison to the previous year, corresponding to a total value of 666.0 million euros. 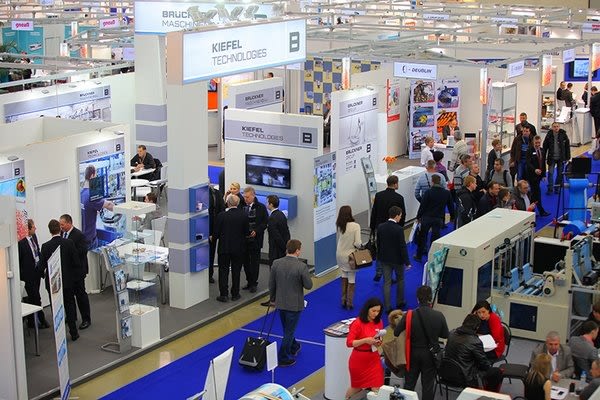