Closure manufacture - production is more economical thanks to ongoing improvements

2011-05-09
Tweet
Taking a hydraulic EVOS clamping unit, for example, the optimised toggle lever geometry as well as the optimised clamping cylinders inside together with hydraulic high-performance valves make a large contribution to energy saving. Turning to the fully electric ELION, it is possible to save energy here through recuperation.

Accumulating braking energy – produced from closing the clamping unit, for instance – is fed back into the system and powers a further electric axis. Energy recuperation is to a large extent only possible with the Netstal 5-point toggle lever, which can cope with the fastest mould movements without the need for spindle drives which are prone to wear and tear – since Netstal’s spindle-free clamping unit demonstrates virtually no self-locking, practically all kinetic energy can be recovered during the braking phases.

This technology has been in use since ELION was launched in 2004, long before this technology came into use in Formula 1. In view of the optimisations and improvements listed above, energy consumption in the Netstal range (based on the production of a PCO 1881 closure weighing 2.3g) can be compared as follows:

In doing this we see that, in comparison with the SynErgy range (100%) and observing identical process parameters, there is a saving of up to 13% with the EVOS range and up to 40% with the ELION range.

As a result of the continuing reduction of closure weight, output can be increased, leading to a doubtless improvement in economic efficiency. The turning point was clearly shown in 2009 and 2010 when output could be significantly increased due to a substantial reduction in cycle time. Competitive advantages arise for closure manufacturers, which are not insignificant for this highly cost-intensive application. Besides the higher output per m2, lower electricity consumption is a core feature of economically efficient manufacturing. 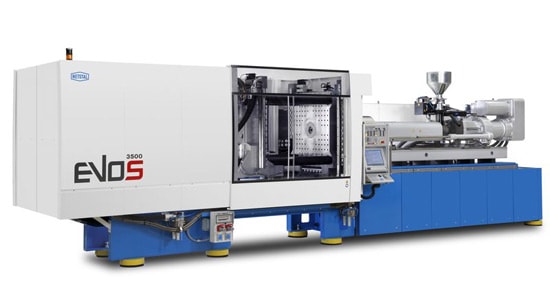 Ultimately, the low overall costs incurred in the manufacture of a closure thanks to the measures mentioned, incl. further improvements in closure design as well as mould and automation performance, are beginning to show. The specialists from Netstal’s Business Unit CAP are in the very early phases of evaluating customer requirements and needs and implementing these in complete, ready-to-use production lines.
Read more: Caps & closures 84 Packagings 819 Machines 479 Injection moulding 423