The reasons for this exponential growth lie both in the technological and also the economic benefits of the Vacurema technology. The Vacurema Basic system features a vacuum reactor and is used primarily for the production of flat film.

This system is highly flexible in terms of feed material and produces rPET in a single step and with particularly low specific energy consumption. International and many country-specific approval certificates document that the product is suitable for direct food contact. The recycling plant can be combined with standard flat film downstream equipment to make a complete single-stage PET sheet production line without difficulty. Erema also offers complete turnkey systems for this purpose. The downstream equipment used comes from Erema's technology partner SML Maschinenbau GmbH, Lenzing, Austria (www.sml.at), which today ranks among the world's top manufacturers of PET film production plants in the field of virgin material. 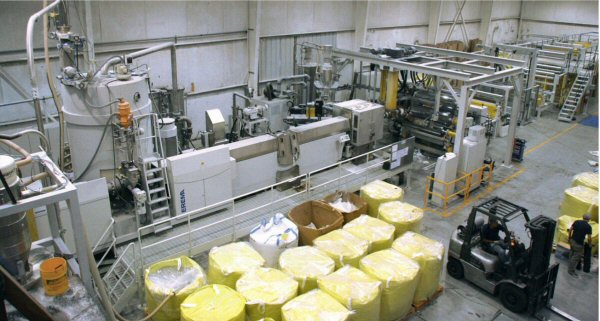 This inline concept can be used to produce PET flat sheet ranging from 150 μm to 1.8 mm in thickness. The Vacurema Basic prepares the flakes and passes on the melt after fine filtration with an Erema RTF automatic backflushing screen changer without the intermediate step of pelletising direct to the SML flat film plant.

Its configuration begins with the melt pump and the flat die and includes all subsequent units such as the roll stack section, winding unit, thickness meter and edge trim removal. This plant technology is based on a modular system so it can be planned individually and also meet any special requirements. Moreover, the Erema/SML flat film system requires only one person for operation. If required, ancillary extruders can also be added to make up to a three-layer flat film plant.

The core components of the Vacurema Basic system are a vacuum reactor with a directly connected robust single-screw extruder. Washed, amorphous PET flakes, as the starting material, are homogenised in the vacuum reactor, heated solely by frictional heat in the process, crystallised, any moisture adhering to them is removed intensively and - essential for direct food contact - decontaminated at the same time in a highly efficient process.

After this pre-treatment the material enters the intake zone of the extruder under high vacuum for the final step to produce high-quality melt. No further degassing openings on the extruder are required. In the case of particularly problematic feed material, however, it is possible to add double degassing to the extruder.

Erema high-performance filters that can be connected directly to the extruder outlet for large-surface, ultra-fine melt filtration, have become extremely popular in the production of flat film.