Plastic design – from imitation to inspiration

2011-12-28
Tweet
Objects made of plastic are constant features of our everyday lives; we are literally surrounded by them. Synthetic materials (polymers) really have proved to be all-round solutions for products from files to toothbrushes and are in the meantime essential elements of our working, living and leisure environments.

Their variety is concealed a little by use of the general term “plastic”, whereas what is in actual fact involved when a closer look is taken ranges from a washing basket made of polypropylene, a milk container made of melamine resin or a chair made of acrylic styrene acrylonitrile. And then there is the paradox that plastics are hardly noticed as such any more since we encounter them everywhere – they have become second nature to us. We would only really notice that they exist if they did not exist any longer: we would have to do without many useful things if plastics were not available.

The aesthetically inclined will be right to point out here that there are also plastic objects of which we are aware when they exist rather than if and when they do not exist. However, this is due primarily to their design rather than to the material: design objects made from plastic, furniture in particular, have even found their way into museums, where they can be admired as avant-garde classics. 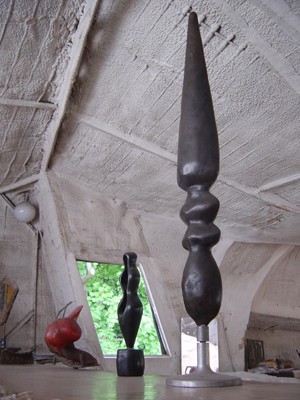 Product designers discovered plastics for their work almost as soon as industrial manufacturing of them began. The product environment started to be revolutionised at the latest in 1907 with the invention by the Belgian chemist Leo Hendrik Baekeland (1863 – 1944) of Bakelite, a compound made from phenol and formaldehyde that was the first thermoformable polymer – the foundation was laid for the development of plastic into the material of the 20th century. Until then, plastics had only replaced natural materials that were expensive because they were rare. Celluloid, for example, a biopolymer obtained from wood (nitrocellulose) and camphor, that was patented in the USA in 1868, imitated expensive ivory and was initially used to make billiard balls.

The history of plastic design began with Bakelite too, because product designers accepted the challenge of creating new objects with the innovative new material for which there were no historical models, particularly cameras, telephones (see picture gallery) and radios. Art nouveau and art deco costume jewellery was also made from bakelite, however.

By modern-day standards, the variety of different designs at this early stage was strictly limited by the restrictions of technical and economic efficiency. “This did not change until the streamlined form from the USA defined a distinctive formal language for the Bakelite material – and thus for plastic in general – for the first time from 1930 onwards”, as Andrej Kupetz ), the executive director of the German Design Council in Frankfurt am Main, explains in an essay about the “Evolution of design in the course of time”.

Although it at first glance seems to be pointless to give a cupboard or an ashtray a streamlined shape, this development proved to be an incredible success in the consumer goods field. Following the economic crisis in 1929, it stood for the start of a new era, full of optimism and with a strong belief in the future.” A real breakthrough was not made in Germany until after 1945. At a time when the country was reluctant to focus on the past, streamlined shaping stood for a new beginning – looking forward rather than back. The “kidney table” became the most well-known design object of this period.
Read more: Plastics 602 Technologies 303