2010-11-24
Tweet
What sort of oil and gas prices are you counting on for new capital projects?
Our budgets are based on a medium-term price of $80 for a barrel of oil and about $60 for a barrel of oil equivalent for gas. Keep in mind that during this transition period, we’re making sure that our projects will still be viable with oil at $60.

What are you relying more on organic gowth or acquisitions to drive cntinued growth?
Exploration remains our priority for growing Total. It’s the foundation of value added in a company like ours.

But you can only add 700 to 750 million barrels of resources a year through exploration, which isn’t enough to replace our reserves. We currently produce roughly 850 million barrels annually and we have to replace that every year, bearing in mind that our fields’ natural rate of decline is about 5%.

That’s why we make acquisitions. But there’s a big difference between acquiring 25% of Chesapeake’s Barnett Shale assets in Texas and acquiring a 25% stake in Chesapeake. We must be cautious and make sure that the payoff for our acquisitions is in line with our organic growth. 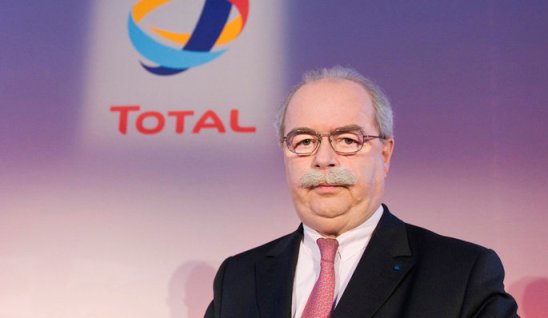 When it comes to acquisitions, are there some approaches that interest you more than others?
Exploration We’re increasingly inclined toward partnerships. For example, in marketing, we combined our retail network with Erg’s in Italy. It was a very profitable deal for both companies: the partnership made both of us more competitive and helped us achieve critical mass.

Expanding our existing capabilities is still very important, but we don’t see anything wrong with learning from others. I’m not embarrassed to admit that in a few specific areas, some companies have more skills than we do. We have to partner with them to gain knowledge and expertise.

In the Gulf of Mexico, for example, we signed an agreement with Cobalt. It has demonstrated expertise in exploring that part of the world, but needs our deep offshore experience to develop its fields. This has the potential to be a win-win partnership. To penetrate new markets or develop new resources, you have to know how to work in partnership with others and drop the arrogant attitude oil majors are sometimes prone to.

I’d like to get back to refining for a second. You have announced that you want to scale back your refining capacity in Europe. Does refining still have a future ? What’s its outlook at Total?
As long as the growth in energy demand remains based on oil, especially for transportation applications, refining will be necessary. We never said we were pulling out of refining; we simply said that it had to be adjusted to demand. Today there is a real overcapacity problem, in both Europe and the United States.

We must also supply the market with the products it wants, in particular more diesel fuel, and products that meet environmental specifications. That’s why we upgraded the Gonfreville, Antwerp and Leuna refineries.

It’s also important to understand that our decision to invest in a project like the Jubail refinery in Saudi Arabia is not an example of offshoring. We’re not serving the same market and the Jubail refinery’s production is intended chiefly for Asian markets, not France.

Let’s wind things up by talking about your ongoing image problem in France. Is it really a problem, since it doesn’t stop you from making money?
The goal of a company is not just to make money. It’s to make enough money to grow profitably. It’s healthy for a company to be able to manage its future. In France, we’re regularly attacked for our earnings.

But posting a profit of €8 billion means nothing in and of itself and it’s not enough when you’re investing more than €13 billion annually. If we don’t earn more, we’ll have to change our strategy and scale back our operations. This message is starting to get through, but that’s not how we envision the future.

That said and in answer to your question, I think that changing the company’s image is worth the trouble. First, because nearly 100,000 people work at Total and are proud of it. Yet the negative image society reflects back to them still stings - even though our image isn’t nearly as black as it is sometimes painted.

We’re not having any problem hiring right now in France. In addition, a recent survey found that when the French are asked which company projects the best image of France abroad, we rank second. That surprised everyone - except for us here at Total.
Read more: Analysis 101 Market 470 Plastics 601 Top management and companies 135