2016-06-28
Wacker, the Munich-based chemical group, will present a novel electrically conductive silicone rubber dispersion at the 20th International Trade Fair for Plastics and Rubber K 2016. POWERSIL 403 has been developed for manufacturing the outer conductive film on cable accessories for transmission and distribution cables. The product yields a conductive coating characterized by high elasticity, good mechanical properties and scrub resistance. This makes the dispersion suitable even for cable fittings to be installed via cold-shrink processes. The product contains no aromatic compounds such as toluene. K 2016 will take place in Düsseldorf, Germany, from October 19 to 26, 2016.

In the transmission and distribution industry, cable joints and connectors are coated on the outside with an electrically conductive material. The purpose of this conductive film is to minimize the electric load on the insulating layer and, in so doing, ensure that the fittings can be operated safely for long periods of time. The conductive material is applied in a thin layer as a liquid dispersion, after which it cures to form a solid material. Cable accessories used in the transmission and distribution industry include cable joints and terminations.

The new POWERSIL 403 silicone rubber dispersion likewise forms this kind of electrically conductive film. The two-component formulation contains addition-curing silicone rubber, which adheres well to the insulating silicone substrate while forming a flexible film. Elongation at break is roughly 650 percent for this formulation, and its tear strength is 20 newtons per millimeter. This means that a conductive film made from POWERSIL 403 can withstand extreme elongation – without cracking – such as occurs during the production and installation of cable accessories suitable for cold-shrink processes.

Tiny carbon-black particles are what make POWERSIL 403 electrically conductive. During the curing process, these particles combine with the silicone elastomer to form an abrasion-resistant, conductive layer of carbon black that is largely unaffected by the mechanical stress that can arise during packaging, transport or installation.

The product also meets increasingly frequent demands for formulations that contain no aromatics and, as such, are more user friendly. POWERSIL 403 is free of aromatic solvents such as toluene. The low-viscosity liquid can be easily applied by spraying, dipping or brushing. Its electrical properties also make the dispersion suitable for use in antistatic coatings for textiles. 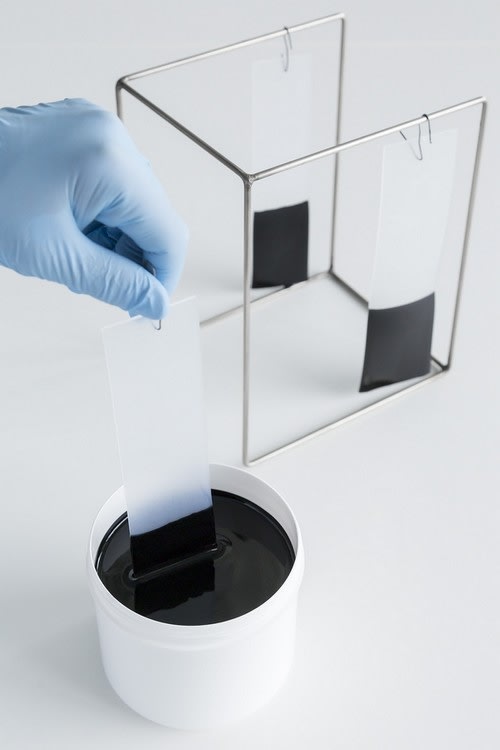