2018-10-03
German version
At Composites Europe 2018, from 6 to 8 November in Stuttgart, Germany, Engel is setting two further milestones on the road to highly economical production of thermoplastic composites. The Engel organomelt process is being used for the first time world-wide in the large-scale production of front-end carriers with integrated air ducts. Engel is also expanding its system range with a consolidation press for processing UD tapes.

The processing and functionalisation of thermoplastic continuous fibre-reinforced semi-finished products, such as thermoplastic fabrics or UD tapes, using the Engel organomelt process will be one key focus at Engel's trade fair stand this year. The world's first large-scale application has been launched in the USA. Valeo Front End Modules manufactures front-end carriers with integrated air ducts for a renowned German OEM in Smyrna, Tennessee. In July of this year, the structural components won an Automotive Award from the Society of Plastics Engineers (SPE) for their innovative production based on organic sheets and its outstanding properties. The parts expose an outstandingly high organic sheet fraction, resulting in significant weight savings and improved crash performance. In addition, it was possible to integrate the air ducts directly into the support using a double-shell structure.

The fully automated, large-scale production system solution supplied by Engel consists of a duo 1700 injection moulding machine with 17,000 kN clamping force, three easix articulated robots for the preparation of a plurality of metal inserts as well as for the handling of the organic sheet, a viper 90 linear robot and a size 5 IR oven. Engel provides this cell as a system solution all from a single sorce. The two half-shells are produced in the same mould in a one-shot process. For this purpose, the two organic sheets are simultaneously heated in the IR oven, inserted into the mould, shaped there and directly functionalised by means of an injection moulding process taking place in the same mould. The Tepex dynalite type organic sheets provided by Bond Laminates are based on glass fibres in a polypropylene matrix. Glass-fibre reinforced polypropylene is also used for overmoulding.

It is only the consistent thermoplastic approach that makes it possible to integrate the forming process and functionalisation, and to merge the supporting structure and functional elements in an adhesive manner. "The fully automated one-shot process contributes considerably to the low unit costs required by the automotive industry," as Christian Wolfsberger, Business Development Manager Composite Technologies at Engel's headquarters in Schwertberg, Austria, emphasises. A further benefit: the use of exclusively thermoplastic polymers simplifies the development of recycling strategies with the aim of returning the components to the material cycles at the end of their service life. "We can see that thermoplastic-based composite lightweight design is increasingly becoming the focus of product developers, both in the automotive and aircraft industries," as Wolfsberger stresses. 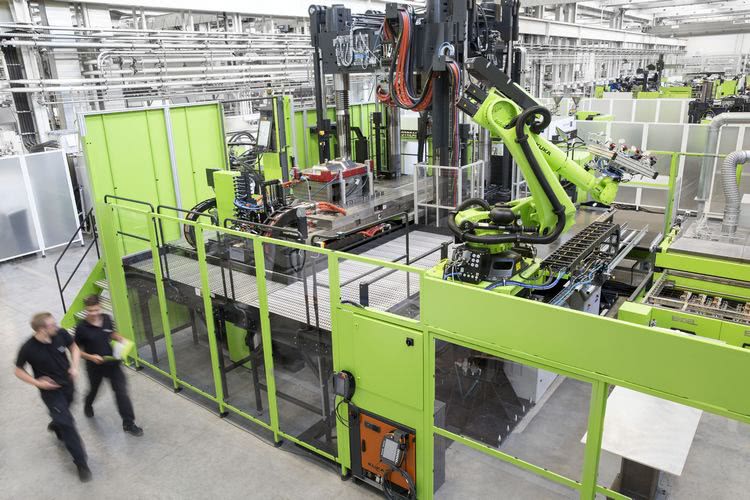