2015-05-06
Tweet
The Indian sub-continent has established itself as the most exciting and dynamic emerging market in the world and is one full of potential and investment opportunities. With a population greater than China but with a polymer demand less than one-fifth the size, the region is expected to enjoy the fastest growth in polymer demand anywhere in the world over the next five years outstripping China and other emerging economies.

For over 25 years AMI Consulting has been documenting and analysing trends in the global polymer industry, with particular emphasis on understanding the downstream market trends for polymer, and now they have put their considerable experience and knowledge into a new report detailing "Polymer Demand in the Indian sub-continent".

The market in the region is dominated by India on account of its huge population and high GDP. However, growth in the region on the whole is driven by its increasingly globally-minded governments that are introducing policies to encourage foreign direct investment and facilitate closer integration with the worldwide economy, helping to drive investment in petrochemicals, polymer production and downstream plastic processing. Growth in the region is not only fuelled by such policy relaxations but also by rising urbanisation of a large, youthful, population, leading to greater consumer spending for items that require plastics - from packaged goods to mobile phones and automobiles. While much of these products are still imported, there is now considerable investment taking place in plastics processing operations to support manufacturing investments, driving growth in polymer demand; those that understand and participate in this market now will reap the benefit of future growth. 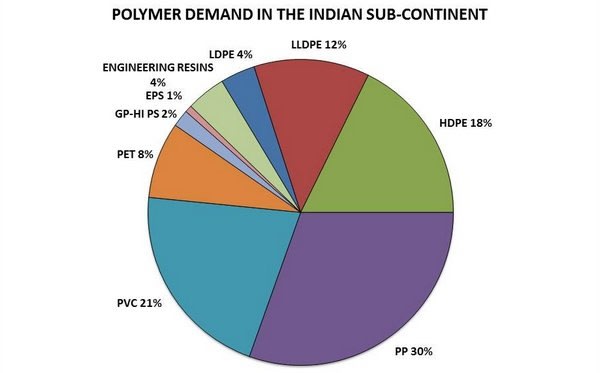 Although rapidly developing, the region does face substantial challenges. For example, lack of sufficient local polymer production is a major obstacle faced by many plastics processors in the region with each country besides India being heavily or even entirely reliant on resin imports depending on the country in question; these imports are mainly sourced from India, the Middle East and South East Asia. Exchange rate fluctuations of local currencies against the dollar add further uncertainty to the market, making it harder to compete against cheaper Chinese imports of finished goods. In general, power supply in the sub-continent is tight but also erratic and unreliable in many regions, which can dramatically reduce effective utilisation. However, in India in particular, the government is seeking to address these issues by implementing strategies to tackle infrastructural and power limitations. In addition, in September 2014, it announced its "Make in India" initiative, designed to catalyse Indian manufacturing to make the country a globally recognised manufacturing hub for years to come.

It is clear that plastics will be called on to play a vital role in this changing region and the plastics industry will benefit from national efforts to encourage and improve manufacturing. In its report, AMI forecasts 8% per year average increases in the Indian sub-continent over the next five years, with levels of annual growth varying from 5% in Sri Lanka to up to over 8% in India.
Read more: Market 470 Polymers 135