2012-02-03
Tweet
The focus has been on low migration, low toxicity materials for applications from Alu/PETP/CPP retortable pouches to coextruded OPP/LDPE packaging films. A new laminating product range has been developed for bio-based films from renewable raw materials, based on low viscosity, solvent-free PUR. Polybutene products from LyondellBasell are used in peal-seal films and to modify the seal initiation temperature in BOPP and COPP from 115C down to 75C. In multilayers the PB-1 is blended with PE depending on the final requirements. There is a new family of C4 Koattro resins developed for PP modification and in pilot production in Italy.

The trend is for wider lines over 5 m in Asia rather than Europe or the USA, and for 5- and 7-layer lines over 3m wide for high barrier film. Cast coextrusion is used to reduce the thickness of expensive layers like EVOH, and allows a wide range of film thickness on the same die. 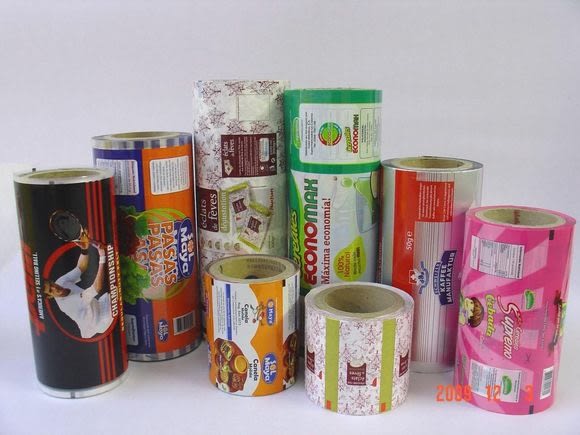 The end use markets for barrier films include liquid packaging and MAP packs for meat, fish and cheese. The level of barrier required varies with the product, for example fresh fruit and vegetables tolerate a water vapour transmission rate (WVTR) of 10-3000 whereas baby food and dried coffee need a much higher seal of 0.7-3 and similarly for the oxygen transmission rate (OTR).

Biaxially oriented films are found in barrier applications from MAP to vacuum skin packaging. Multiple bubble systems are used to produce many of these films from shrink bag and film to lidding films and GAP Srl provides systems for this. In a three-bubble line the plastic is extruded through a circular die and immediately water quenched; the resulting tube is then re-heated and blown and at this point the non-contact orientation occurs; the second bubble is air cooled and flattened, then a third bubble is annealed in ovens. Orientation improves mechanical properties, enhances impermeability, dimensional stability and gives a gloss effect.

The layer thickness in barrier films ranges from 25 microns down to 1440 Angstroms. Extrusion Dies Industries is involved in microlayer production and studied the gauge required to achieve the right properties. For example, the oxygen permeability of EVOH is around 10 cc/m2.day.atm at 4 microns thick and down to 1.4 at 25 microns thickness. Oxygen barrier properties also improve with a higher level of crystallinity, which in turn is affected by cooling rate, orientation.

Polyamide is often used for its barrier properties, for example in gas flushed barrier laminates for Dairy Crest resealable cheese packs. Ube has capacity to produce over 155 kT per year of PA at sites in Asia and Europe and copolymers of PA6 and 6,6 are produced for film use. They are found in applications such as shrink bags, for example in 7-layers with EVOH, PE and tie layers at a total thickness of 50 microns, or with a PET in a 9-layer structure. The 7-layer film tested by Ube has good puncture resistance, which is important for wrapping products with sharp edges like bones in meat.

Another grade of PA, Terpalex, which has a much higher CO2 transmission rate, is used for packaging items that need to “breathe” like respiring cheese. These types of films are replacing PVDC-based bags and are around 40% lower gauge.