2012-02-03
Tweet
The ultimate goal is a film material that is highly transparent and stiff with good tear resistance for applications like bread bags, magazine packaging and lamination film. A Lumicene coextruded structure can provide the necessary properties. This metallocene polymer can also be used in each layer in a PE/PP combination for interlayer adhesion without a tie layer, optimising the optical performance. A new Supertough material is in development, which would allow more downgauging.

MAH-modified polyolefin is extrudable adhesive, and is supplied by companies such as Yparex. The MAH reacts with the hydroxyl group of minerals, glass and EVOH, and with the amine group of polyamide. During the K show in 2010 an Yparex resin was run in a 16-layer demonstration film by Windmoeller and Hoelscher.

PP based Yparex grades have higher heat resistance, so are suitable for applications such as hot fill. In three-bubble film lines the adhesion time is very limited as the film is quenched after exiting the die and there is a high level of stretching, so appropriate adhesive has been developed. A new player has come into the tie-layer resin marketplace: Industrie Polieco MPB Srl of Italy. The company grafts MAH onto LLDPE and has compounds and resins for blown and cast film extrusion, EVOH and PA. 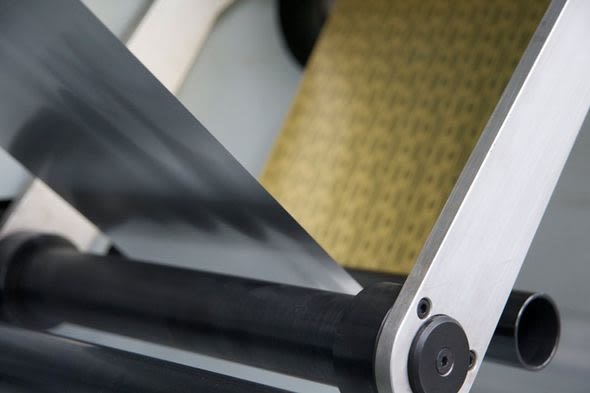 Quality control of multilayer film is under investigation. There are a variety of possible defects including insects, gels, black specs, contamination, die lines, oil stains, holes and fish eyes. 40% of defects originate during pellet transport, 25% in the resin (either the recipe or contamination) and 15% of problems arise during processing. OCS Optical Control Systems is developing technology for monitoring defects and feeding the results back into the production process including the raw material supply system, according to the specification for each film type, from optical sheets to food films.

One area where quality control is critical is in the pharmaceutical industry. Amcor Flexibles works in this sector and produces active pharma packaging with a desiccant. The outer film layer is OPA at 25 microns, the next layer is aluminium at 45 microns and the inner layer is PE. Dessicant particles can be incorporated into the inner layer to inhibit cross diffusion and keep moisture to a minimum in cold form blisters. Calcium oxide is the active component and it is blended into a mineral-filled, blue PE masterbatch, which is then coated onto aluminium foil. Formpack Dessiflex has been shown to keep the blister cavity dry for more than 5 years at 40C/75% r.h.

The environment and sustainability are the hottest topics in the packaging industry. Innovia has been at the forefront of developing barrier films from renewable sources.

The NatureFlex range comprises a transparent cellulose film with barrier coatings, and the wood pulp feedstock is from managed forests and not from food crops, which means that the product content is 94% renewable carbon.

This film has excellent twist properties, provides an aroma barrier and is heat resistant to 200C. It is used in Quality Street (Nestle chocolate) wrappers in rainbow colours and is being tested for barrier properties in paper laminates. It has recently been tested and found to be a good barrier to mineral oil, which has been the subject of recent food safety research.

The company’s Bio-Flex range comprises PLA and co-polyester and can be incorporated in a 3-layer film that can be processed on conventional LLDPE blown-film extruders and contains 60-80% renewable carbon.

Another innovation in the retail industry is the development of smart packaging. The Fraunhofer Research Institution for Modular Solid-State Technologies is studying sensor technology and has developed a colour-changing film, which can be integrated into packaging and detects amines from decaying food such as fish and meat, changing colour from yellow to blue. When the blue colour is very evident, the food is not safe to eat.
Read more: Analysis 101 Film 127 Market 470