2016-12-09
Production lines for still beverages utilising nitrogen dosing can now also take advantage of the Sidel StarLite PET bottle base with the launch of the Sidel StarLite Nitro version. The new base ensures bottle resistance and stability, even under extremely high temperature conditions, while also providing benefits in terms of both lightweighting and energy saving.

The new non-petaloid StarLite Nitro base utilises a unique shape that significantly increases base resistance and stability. This means the new base design can simultaneously increase PET bottle rigidity by enhancing resistance to the internal pressure created by nitrogen dosing, even in harsh conditions, while lowering package weight and energy consumption. It also offers packaging design differentiation and optimised aesthetics, importantly without compromising product safety. The StarLite Nitro base takes all the benefits of the StarLite base, introduced in 2013 for the production of still and carbonated beverages bottled in PET, which has been recognised as the 'Best Environmental Sustainability Initiative' at the 2013 Global Bottled Water Awards.

No compromise between bottle quality and strength

The Sidel StarLite Nitro base ensures improved PET bottle quality without compromising strength and increases stability throughout the entire supply chain. It enables producers to increase bottle resistance to deformation in any production environment. "The large and stable surface upon which the bottle stands, combined with other structural elements within the bottle design, enables the formed PET bottle to better withstand the internal pressure caused by the addition of nitrogen and improves bottle stability during conveying, depending on the wall thickness of the base," says Vincent Le Guen, Vice President, Packaging & Tooling at Sidel.

This is a particular benefit, for example, in production at high altitude with distribution then at sea level or applications subject to very high temperatures. Developed and tested by Sidel's packaging experts with numerous computer simulations, this new base has also been subjected to real-world, physical testing to ensure optimal performance through the supply chain. 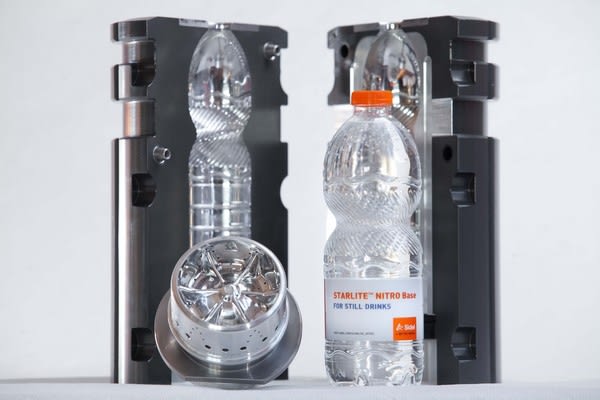 Just like its predecessors in the Sidel StarLite range, the new 'Nitro' version decreases the amount of raw material needed to create the finished PET bottles. The optimum strength-to-weight ratio is achieved by reducing the thickness of the bottle's wall. The resulting bottles require less energy within the blowing process, are lighter in weight and therefore can cost less to produce. "This solution addresses beverage producers' needs, who are looking for ways to lower their total cost of ownership (TCO) to stay ahead in a competitive market yet still achieve even greater sustainability. The new Sidel StarLite Nitro base also ensures packaging integrity and creates an end-product which is packaged in a way that grabs consumers' attention", continues Le Guen. For instance, a 0.5 litre PET bottle with a StarLite Nitro base weighing 1.8 grams can resist an internal pressure of up to 1 bar depending on the design of both the preform and the bottle, and the grade of the PET resin used.

The new StarLite Nitro base is an attractive, flexible solution from Sidel that enables the same PET bottle design to be used for beverages produced with or even without nitrogen dosing. It works with regular, ultra clean and aseptic filling. With a design similar to the base of bottles usually used for still beverage production, it avoids confusion with bottles with a mini-petaloid base on the supermarket shelves, traditionally associated with carbonated soft drinks by consumers. The new base is available for bottles ranging in size from 0.2 litre to 2.0 litres. It can be adapted for all generations of Sidel blowing machines, whatever the production output, including the latest Sidel Matrix blowers. The StarLite Nitro base can easily be incorporated into most existing bottle designs by Sidel's packaging engineering team and retrofitted onto existing production lines and moulds, using Sidel's enhanced StarLite mould bases and the company portfolio of line conversion services. 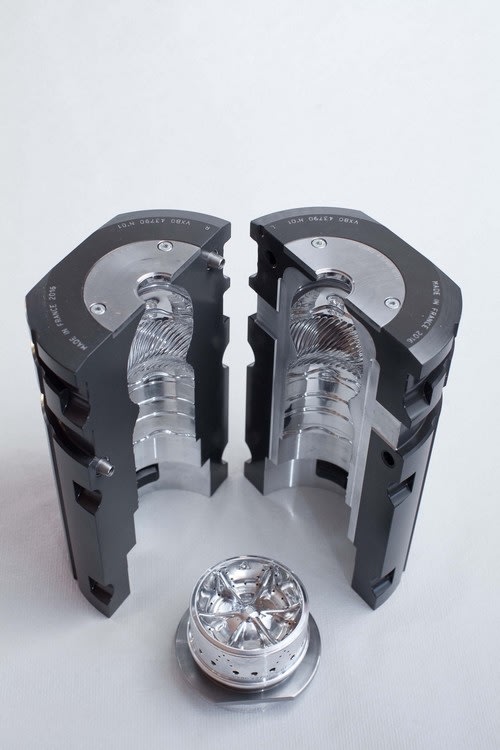 With this increased stability and resistance, bottles featuring the StarLite Nitro base perform better throughout the whole supply chain, even in harsh conditions. They are ideal for conveying - from filling to the labelling and packing stages - optimising production uptime and keeping stoppages to an absolute minimum. Additionally, bottles produced with the new base will be more resistant to extreme temperatures. In conditions of up to 50°C storage, bottles can withstand up to 25 days without deformation and have the potential to last even longer. They can also demonstrate a 50% decrease in base rollout under frozen conditions.

The potential for lightweighting of the new Sidel StarLite Nitro base offers substantial cost savings too. For instance, a reduction of just 1 gram in a 0.5 litre PET bottle produced at 2,200 bottles per hour can result in savings of Euros 396,000 per year, based on 5,000 hours of annual production. Following the same calculation process, a reduction of just 1.8 grams in a 1.5 litre bottle can lead to savings of Euros 713,000 per year. Having a wider range of parameter settings - or 'process window' - yet still achieving the desired blown result, the new base is also easier to blow than existing bases. Introduction of the base can mean a reduction in the need for air pressure of up to 25%. For a 0.5 or 1.0 litre bottle for example, only 18 to 20 bars of air pressure are needed for blowing, compared to the 25 bars needed for traditional bases. This in itself can lead to additional energy savings of up to Euros 90,000 every year. 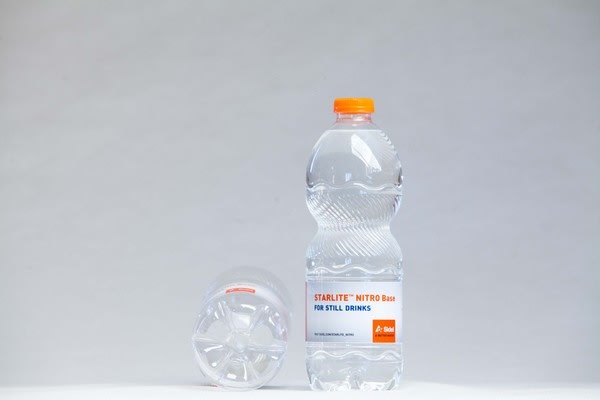