Bayer MaterialScience will present soon its new Baycusan C 1008 polyurethane dispersion for styling hair. The new film-forming polymer enables formulators to manufacture hair sprays with firm and lasting hold. Despite the dispersion’s strong fixing effect, hair styles secured by it retain a natural appearance, because the hair is neither stiff nor sticky.

Hair sprays containing the polyurethane dispersion also give hairstyles a flexible hold. What’s more, the new raw material makes life easy for formulators: The polymer is supplied in ready-to-use form and is compatible with many other components in hair sprays. Furthermore, it is just as suited to formulations with a high propellant or solvent content as it is to those with a high water content. 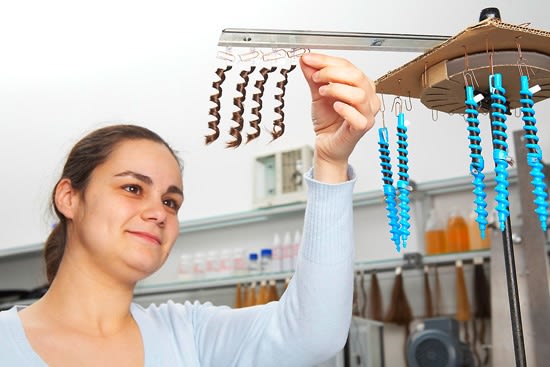 At the same time, the polymer forms a highly elastic film on hair, just like Baycusan C 1001, as her team proved using the “omega loop method.” In this test, a strand of hair is clamped in such a way that it approximates the shape of the Greek letter omega. After applying the film former, the force required to depress the strand by 25 percent at its highest point is measured. This process is repeated ten times. If the strand has perfect “shape memory,” the same force would be required each time to “dent” it. In reality, the force declines, but to a much lesser extent for strands treated with Baycusan C 1008 than for others treated with acrylate copolymers, for example.

The new polymer also proves to be superior to common polymeric film formers when it comes to another styling property: Curls formed of strands treated with the new polyurethane change their length and shape only minimally, even in high humidity. The high humidity curl retention was still very good not only after five hours, but even after a whole day.

“In developing a new hairstyling polymer, we also had a number of objectives relating to the formulating properties,” says Viala. For instance, the film-forming polymer combined with ethanol/water mixtures should yield the clearest possible solutions, and its viscosity in these solutions should not rise significantly at high water content levels. This ensures that the polymer is suitable both for formulations with a high alcohol content and for those with a low VOC (volatile organic compounds) content. It is also important that the polyurethane dispersion forms stable solutions with common propellants, such as dimethyl ether, even at very low temperatures. “We achieved all of these objectives with Baycusan C 1008,” Viala says.
Read more: Plastics 601 Polymers 134