2015-02-27
Tweet
"We achieved our goal for 2014: We increased earnings – despite the disappointing economic development in Europe. We grew profitably. We further strengthened our chemicals business and in turn improved our margins. We have our costs firmly under control. This is an outstanding achievement of the entire BASF team," said Dr. Kurt Bock, Chairman of the Board of Executive Directors of BASF SE, at the Annual Press Conference in Ludwigshafen.

The Catalysts division as well as the Agricultural Solutions and Oil & Gas segments mainly contributed to this increase. Positive currency effects (plus 2%) could not compensate for the mainly oil-price related decline in sales prices (minus 4%). Income from operations (EBIT) before special items rose by €40 million to €1.5 billion (fourth quarter of 2013: €1.4 billion). EBIT before special items rose significantly in the Chemicals and Agricultural Solutions segments compared with the same period of the previous year.

At €74.3 billion, sales in 2014 matched the level of the previous year (2013: €74.0 billion). Sales volumes increased in all segments in 2014. Overall volumes grew by 4%. Prices decreased by 3%, largely due to significant decreases in oil and gas prices. Negative currency effects dampened sales in almost all divisions.

EBIT before special items grew by €280 million to €7.4 billion in 2014. This was primarily the result of a larger contribution from the chemicals business – comprising the Chemicals, Performance Products and Functional Materials & Solutions segments. EBIT was up €466 million from the previous year’s level and reached €7.6 billion. Net income amounted to €5.2 billion, exceeding the previous year’s level of €4.8 billion. Earnings per share rose from €5.22 to €5.61. Adjusted earnings per share were €5.44 compared with €5.31 in the previous year.

"We stand by our dividend policy and will propose a dividend of €2.80 per share at the Annual Shareholders' Meeting," said Bock. This is an increase of 3.7% compared with the previous year. Based on the year-end share price for 2014, BASF shares again offer a high dividend yield of 4.0%. 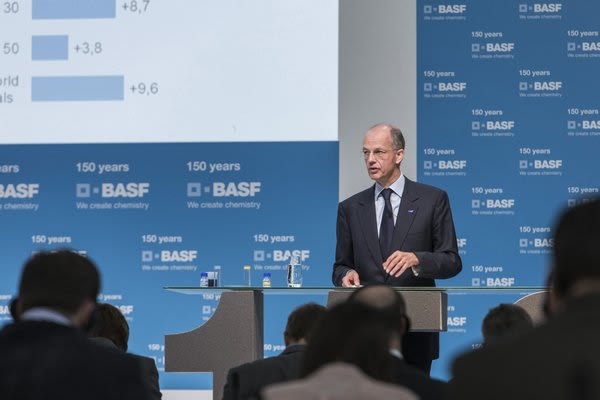 "The outlook for the 2015 business year is subject to significant uncertainty. Oil and raw material prices are volatile, as are currencies; the emerging markets are growing more slowly; and the global economy is being dampened by geopolitical conflict. For 2015, we nevertheless anticipate somewhat stronger growth in the global economy, industrial production and the chemical industry than in 2014," said Bock. One reason for this is the lower oil price. For 2015, the company assumes the following economic conditions (previous year figures in parentheses):
Read more: Financial results 69 Plastics 602