2012-06-19
Tweet
A plastic compound from BASF has, for the first time, found use in the charge-air section of a commercial vehicle. The charge-air duct on the DD13/DD15 truck engines is one of the first large production applications for the new polyamide (PA) grade Ultramid A3W2G6. The component, which is produced by ElringKlinger from the very heat aging-resistant PA, offers high mechanical and thermal capabilities. The multifunctional oil intake module is also manufactured from a BASF polyamide. The designation DD13/DD15 covers a range of high-performance truck diesel engines with a displacement of about 13 and 15 liters, respectively, that Detroit Diesel Corporation, truck engine and component manufacturer and Daimler subsidiary, builds in the USA.

The lightweighting trend has, in the meantime, also taken hold in the truck sector. As in the automobile sector, the objective on the DD13/DD15, is to replace heavy metal parts with lightweight plastic components that provide equivalent performance. Compared to its aluminum predecessor, the lightweight charge-air duct made from the BASF polyamide is 1.8 kg, or 50 %, lighter.

The high heat-aging resistance of the polyamide 66 specialty Ultramid A3W2G6 is confirmed by its performance in pulsating pressure tests of the component at 140°C. The charge-air duct must survive 3,000 hours of pressure fluctuations between 0.4 and 3.5 bar. These are special requirements in the commercial vehicle sector. They arise from the mixing of turbocharged fresh air with the hot (up to 230°C) recirculated exhaust gas (EGR: exhaust gas recirculation). At the point where the exhaust gas is reintroduced and under high loads, as when climbing steep grades to mountain passes, peak temperatures of up to 200°C can occur.

The oil intake module on the DD13/DD15 also presents demanding challenges for the material. It is made from Ultramid A3WG7 and, in addition to the oil intake connection and oil supply line, incorporates an integrated check valve. In the component test, the aged material has to withstand over 10 million oil pressure pulsation cycles between 5 and 13 bar at 120°C. In long-term testing of the check vale, 500,000 cycles must be withstood in the presence of a sharp oil mixture that contains not only aged engine oil but also fuel components. Ultimately, a truck is expected to drive about 1.2 million km. In this part, substitution of Ultramid for metal and the high degree of functional integration resulted in cost and weight reductions of 0.8 kg, or 50 % per part. 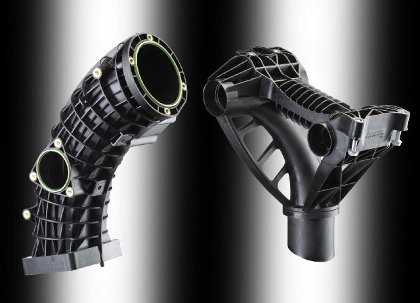 Not without computer simulation and component testing

With the aid of its universal computer simulation instrument Ultrasim, BASF provided assistance to the development staff at ElringKlinger. In the case of the oil module, for instance, one objective was to prevent material fatigue induced by dynamic engine operation and in this way maximize the service life. At the same time, the weld seams had to be designed very carefully: weld seams are potential weak spots that should be subjected to the lowest possible load during operation. Computational design techniques were used to satisfy both requirements: in the first case, numeric topology optimization; in the second, shape optimization: Employing bionic principles, the virtual approach places plastic at precisely the locations of the component where it is really needed and must withstand loads. This development was accompanied by leak, pulsating pressure and burst pressure tests in the component testing laboratory at BASF.
Read more: Compounds 85 Polyamide (PA) 144 Plastic car parts 18