2009-11-27
Tweet
BASF is now offering a new biodegradable plastic. It goes by the name Ecovio FS and it has joined the existing Ecovio product line.

BASF has optimized this new plastic for two specific applications: for coating paper and for manufacturing so-called shrink films, which serve to easily wrap packaged goods. For this reason, the first two new plastic types are called Ecovio FS Paper and Ecovio FS Shrink Film. The new plastic has been presented to a technical audience for the first time at this year’s conference of the European Bioplastics Association beginning of November. Sample material is already available. Initial production tests at customers’ facilities have been successful. Introduction into the market at large is scheduled for the first quarter of 2010.

As has been demonstrated in recent composting experiments, the new Ecovio FS biodegrades even more rapidly than its predecessors, and it has a higher content of renewable raw materials. - Ecovio FS consists of the likewise new, now bio-based Ecoflex FS (a biodegradable polyester made by BASF) and of PLA (polylactic acid), which is extracted from corn starch. The use of the new Ecoflex FS raises the proportion of bio-based material in Ecovio FS Shrink Film to 66% and that of Ecovio FS Paper to a full 75% - explains Jürgen Keck, who heads BASF’s global business with biodegradable plastics. 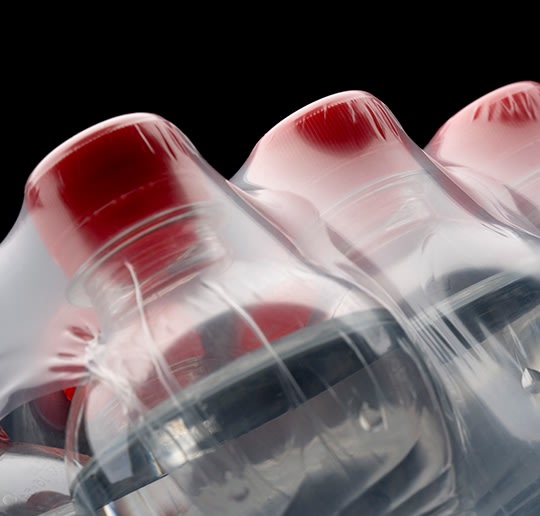 The experts who developed the new Ecovio FS focused on the properties that are required of these special applications. “In order to obtain effective paper coatings, a film made of the new Ecovio FS Paper has to be easy to process and exhibit good adhesion to the paper, even when applied in thin layers. Such coatings are used, for example, on paper cups or cardboard boxes - explains Gabriel Skupin, who is in charge of technical product development for biodegradable plastics. Ecovio FS Shrink Film, in contrast, has a selected ratio of shrinkage to strength, so that its mechanical load capacity at a film thickness of merely 25 micrometers is greater than that of a conventional polyethylene film that is 50 micrometers thick.

With this new product family, BASF’s experts for biodegradable plastics are further expanding their assortment. The company is aiming to become more specialized in this realm, so as to meet the requirements of very specific market segments. This is reflected in the nomenclature, which will comprise three elements. The first stands for the processing technology – in this case, F for “film”. The second, S, stands for “special” and indicates that the new bio-based Ecoflex FS is present. The actual application itself forms the third element of the name such as, for instance, Paper or Shrink Film. - This consistent designation method, which will be implemented early next year together with the new products, illustrates the broad potential we anticipate for technically advanced biodegradable products in this market, which has become very diversified - explains Andreas Künkel, head of BASF’s market development for new biodegradable plastic products.
Read more: Plastics 601