2017-04-24
In supermarkets, factory halls and offices around the globe, the TECTON strip light system from Zumtobel provides pleasant and energy-efficient lighting with its combination of LEDs and PLEXIGLAS.

Switching to energy-efficient LED lighting is worthwhile wherever large surface areas need to be permanently lit up. In supermarkets, for instance, light is required to present goods as attractively as possible throughout the opening hours and to create a pleasant environment across the entire store. That is why lighting is one of the biggest energy guzzlers in supermarkets. SPAR Austria is therefore equipping all of its new branches with LED lights from Zumtobel and is also refitting its existing branches.

Lighting is the third-biggest power consumer in supermarkets after cooling and air-conditioning.

The TECTON strip light system reduces energy consumption for all artificial lighting in an average-sized supermarket by at least 40 percent as compared with fluorescent tubes, and at the same time offers a better quality of light. "In supermarkets, efficient LED lighting often pays off after as little as 18 months, compared with neon lighting," says Dieter Safarik, global key account manager for supermarkets at Zumtobel. "Today it makes no sense not to use LEDs." But things looked very different when SPAR decided to refit its stores for the first time in 2011. "The LEDs were far less efficient than they are now.

But SPAR was keen to make this green investment," says Safarik, who has been liaising with the supermarket chain for 30 years. During this time, lighting technology has continuously developed, first coming up with increasingly efficient and small neon tubes, then with LEDs. Up until 2010, Zumtobel used only neon tubes for the TECTON strip light system. "But at some point, there was no way to make these tubes any more efficient," Safarik explains. Together with SPAR, the Austrian lighting experts therefore developed an LED alternative for the proven strip light system. 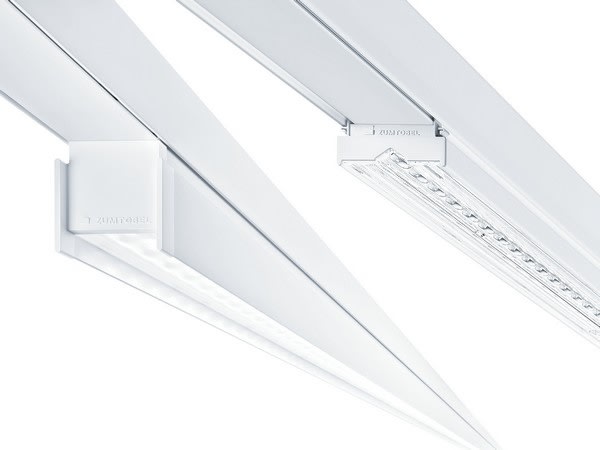 The challenge consisted in finding a solution to adjust the light distribution of the LEDs to the special requirements of supermarkets. The main elements to be lit up there are the shelves, which make up most of the sales surface.

"Normally, our LED lights only illuminate the floor, as evenly as possible," Safarik explains. LEDs therefore need a light-guiding material that enables vertical illumination of the entire shelf front, as evenly and brightly as possible. Ideally, the floor area that often becomes soiled in poor weather is kept darker on purpose. Zumtobel chose PLEXIGLAS to meet these requirements. This trademarked acrylic from Evonik offers high light transmission of 92 percent and is therefore especially suitable for lighting applications.

For the TECTON series, Zumtobel uses various grades of PLEXIGLAS molding compounds for the manufacture of optical covers and special lenses. Key features here are the material’s ability to accurately reproduce the lens surface, as well as its good light guiding properties. This very combination allows for manufacture of lenses with specific structures that provide variable directional characteristics. The "Shelf Beam" model, for instance, puts a focus on the symmetrical distribution of light across the shelf surface, whereas the aisles are less strongly lit. "The full benefits of the LEDs can only be reaped using these sophisticated PLEXIGLAS lenses," says Safarik. 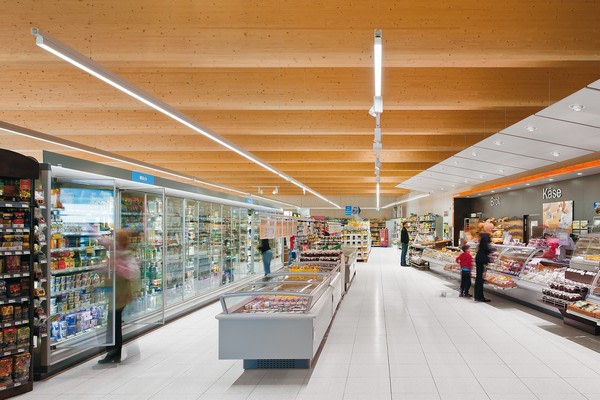 In addition to their high energy efficiency and luminous efficacy, LEDs also offer a long service life and feature low maintenance costs. "We have been installing the TECTON LED strip light system since 2010, and so far there has been no need to replace any of the LEDs," Safarik reports.

That is astonishing, given that some of them have already reached the end of their theoretical service life of 50,000 hours. "That’s the big advantage of LEDs, they don’t simply burn through at some point like fluorescent tubes do. They just shine a little less brightly," Safarik says. PLEXIGLAS also offers the same high level of light transmission after a long service life as it did on day one. The material remains transparent for a long time and shows no yellowing. It may still make sense to refit old LED systems after a certain time, though, because of efficiency improvements of LEDs. Safarik says: "Developments in this field proceed rapidly."

Evonik is a worldwide manufacturer of PMMA products sold under the PLEXIGLAS trademark on the European, Asian, African and Australian continents and under the ACRYLITE trademark in the Americas.
Read more:
Polymethyl methacrylate (PMMA) 16