At Chinaplas 2019, which will take place from May 21 to 24 in the city of Guangzhou in Southern China, Kautex Maschinenbau will be unveiling a newly developed 6-layer extrusion head for packaging applications.

The new 6-layer head can be used to produce multi-layer hollow plastic containers with a volume of between 500 and 1500 ml. These are mainly used for packaging applications in the food sector. The new extrusion head has been jointly developed by German and Chinese engineers at Kautex. It will be in operation at the trade fair on a 3rd-generation KCC10S blow molding machine, so that visitors can see its functionality and performance for themselves. This machine range, which is made in China, is used as a laboratory machine at all Kautex technical facilities around the world.

At the show, the KCC10S MK3 will be producing a 1000 ml 6-layer milk bottle. The single station machine has a CP50 extrusion head, the first 6-layer head for consumer packaging made in the Chinese factory. The heads of this new series have a minimum center distance of 140 mm and will be available with up to six parisons. CP50 heads are compatible with Kautex machines of the KCC and KBB series, and in some cases can also be retrofitted on other machines. The extrusion heads are made at the Chinese Kautex plant in Shunde. That not only means better value for money but also reduces delivery times. 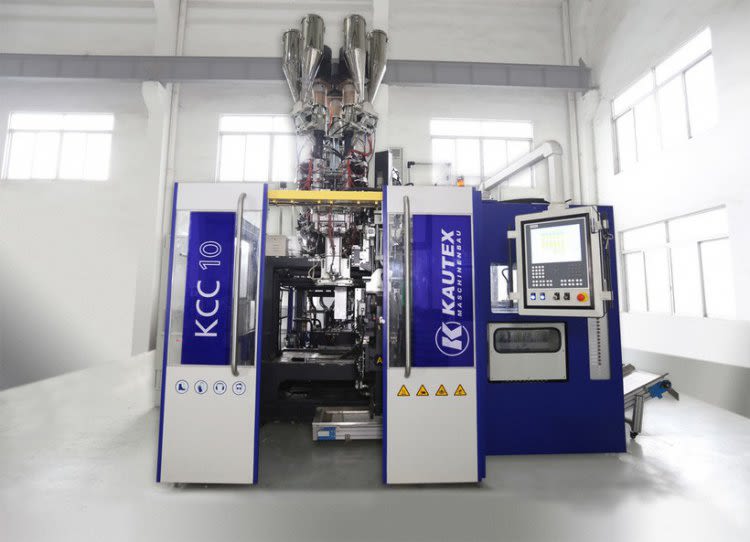 Mastering production processes in real-life conditions on a simulator

As well as exhibiting its KCC10S MK3 machine, Kautex will also be demonstrating its virtual training simulator at Chinaplas. These virtual machines are used in the same way as flight simulators to train employees in the various production processes on Kautex machines. First introduced in 2013, virtual machines are now available for the, KBS, KBB and KCC series. The compact work stations are equipped with a powerful computer simulator, two monitors, and a projector. They are used for training and demonstration purposes at the Kautex locations in Bonn (Germany), Shanghai, Shunde (China) and New Jersey (USA). The virtual machines enable employees to be trained on Kautex machines in realistic conditions but without the risk of causing any damage due to incorrect operation, and without consuming any materials. The devices are mobile, plug into any standard domestic electrical socket and can be rented to customers for training purposes.

Kautex now operates three technical research centers called Technikum around the world. In addition to the main technical facility in Bonn (Germany) and another in New Jersey (USA), at the end of 2018 the company opened a third technical center at its production site in the city of Shunde. At the decentralized lab sites, new applications are developed, prototypes and pilot molds are produced and materials and production processes are tested. The testing is led by process engineers with years of experience.