2015-05-07
Tweet
It is the official debut of Ball’s integrated straw solution to the global market. Featuring a self-activated straw, which ‘magically’ appears once the tab of the can is engaged, this smartly engineered mechanism merges modern convenience with a touch of ‘WOW’ to the overall consumer drinking experience. To further advance the solutions appeal, Ball can laser logos, simple images and messages directly onto the exterior of the straw - a notable differentiator in this highly competitive marketplace.

Set to launch in Poland by innovative beverage maker Sulimar, the integrated straw solution features in one of the brand's key drink offerings, Cornelius Grapefruit. The popular flavoured beer, which was previously available in bottles only, was now launched in the premium Ball can - a trailblazing move by Sulimar. With Cornelius Grapefruit's primary consumer base made up of women, this in-can straw is a strategic opportunity to speak to those within a market that are often not comfortable drinking out of a can. In addition, with the can’s slimmed down nature, it also caters to the global move by health-conscious men and women alike to control their portion intake.

"Our cans always give consumers something more than just packaging. The integrated straw mechanism is no exception," says Tomasz Janowski, general manager at Ball. "This can solution is convenient for parties and multiple on-the-go occasions and brings a fun element to enjoying a beverage. We anticipate that this innovation will be well received by consumers and see it as an exciting opportunity for Ball to launch this technology in a progressive market like Poland."

Sulimar brewery played an active role in preparing for the launch by conducting extensive testing with this new packaging format. To realize its market debut, Sulimar developed a close cooperation with the Żabka chain stores to sell the cans in key regions throughout Poland.

"Cornelius Grapefruit is one of the most popular drinks among our consumers and because of this, we thought to further brand visibility by launching our product in the integrated straw cans," says Mariusz Supady, owner of the Sulimar brewery. "We hope that the convenience and innovative character of the can, combined with Cornelius’s new graphic design, will appeal to our main target group - women, as well as the men who often convert to flavored beers as a refreshing summertime drink."

The Polish market launch of the Cornelius Grapefruit cans began the week of April 20. This limited edition launch is supported by a national TV advertising campaign and social media engagement. 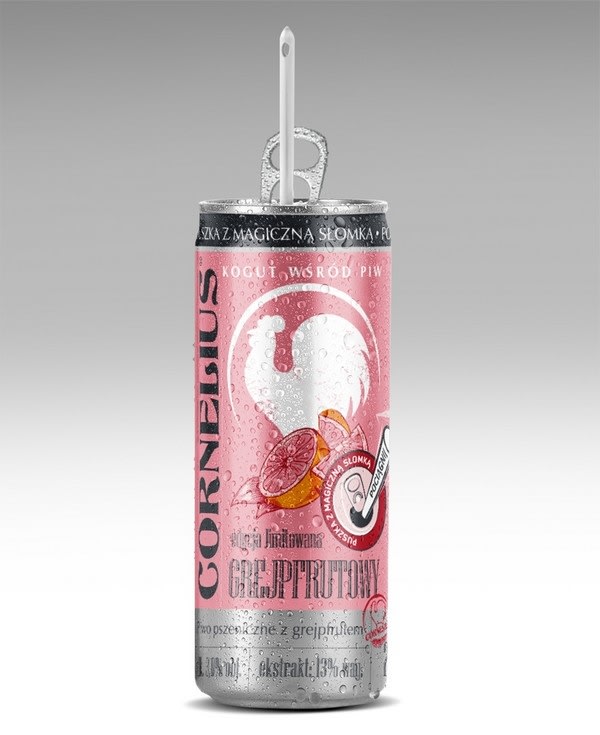