This pouch pack is a tri-part lamination construction of NatureFlex NVS to paper and PLA and was developed by Assen-based converters, Hapece Flexible Packaging.

Managing Director of Hapece, Marius Draayer, says NatureFlex NVS compost packaging films were chosen after customers expressed interest in an attractive, quality pack that was also eco-friendly, innovative and easy to see the contents through.

“From a converter’s point of view, the addition of NatureFlex NVS to this application has also ensured that the pack can stand upright due to the deadfold properties and stiffness it provides,” says Draayer. 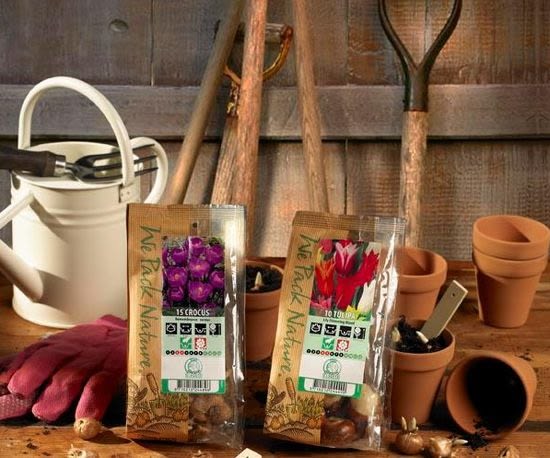 The three Dutch exporters who have joined forces on this project are Florex, Kapiteyn and Mantel Holland. They have set up a sub-brand for this range of compost packaging, We Pack Nature, which is underpinned by the old Dutch saying: “A better environment begins at home”.

"NatureFlex offers not only compostability from a renewable resource but also great technical performance. Innovia Films is delighted to have worked closely with Hapece Flexible Packaging in developing this pack and enabling the We Pack Nature group to realise their objectives on this project,” he adds.

Wood pulp used in this compost packaging is sourced from managed plantations operated under Good Forestry principals (FSC or equivalent). NatureFlex compost packaging films typically have a renewable biobased content of 95% by weight of material according to ASTM D6866.
Read more: Film 128 Packagings 819