IML with labels printed on both sides for the perfect decoration

At the Fakuma 2011 the Swiss IML (In-Mould-Labelling) specialist Beck Automation AG of Oberengstringen (CH) and Glaroform AG of Näfels (CH) show thin-walled cups of highly transparent polystyrene decorated on both sides. Beck offers users of IML for the first time a QA inspection module with camera supervision. The Swiss IML experts aim at a cycle of 3.2 seconds with a 4-impression mould running on a Ferromatik Milacron F160.

The high speed of the automated equipment is the result of the interaction of a production cell consisting of an injection moulding machine Ferromatik Milacron F160 (Malterdingen/Germany) and an injection mould made by our long-standing partner Glaroform (Näfels/CH). The F160 with its GP (General Performance) 50 plasticizing unit fills the 4-impression Glaroform mould with a shot weight of 41 g. Each thin-walled cup has a wall thickness of 0.5 mm and weighs 10.25 g. 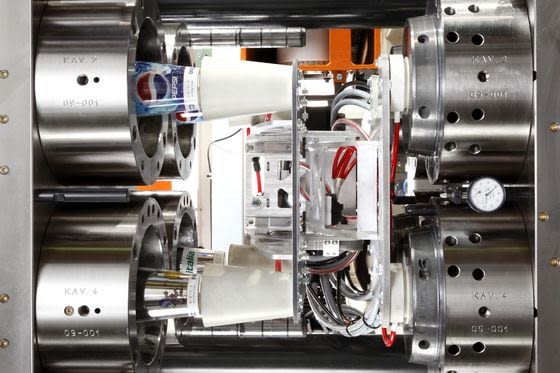 Glaroform injection moulds are designed by the company's own well-trained and experienced specialists who pay attention to maximum cooling near the contours to achieve short cycle times. Special tooling steels suitable for high-gloss and high-quality polishing are used for these IML thin-wall applications. The fully balanced and thermally perfectly tuned hotrunner system developed by Glaroform results in a remarkably high shot-weight repetition accuracy. The „Swissness“ of the mould is also evident when it comes to details: Attention has been paid to ease of handling and service-friendliness. Urs Harder, Sales Manager of Glaroform, comments as follows: „With this in mind we use low-wear and self-lubricating sliding and guide elements. Apart from this we take care to optimally centre the mould parts and make them readily accessible. The highly stable and rugged execution of the entire mould guarantees a high availability and a very long useful life.“

The Beck automation unit feeds the labels from the label magazines horizontally, inserts them from the side in the cavities and removes the finished cups from the mould. The system then stacks the cups on a conveyor. Beck Automation developed for the first time a rejects switch which can be integrated together with the camera inspection module in or on an IML system. The QA module automatically detects and separates any nonconforming products from the flow of good parts. The big advantage of this system is that only the one „bad part“ has to be separated, and not the complete shot. When necessary the system can easily be changed over to other IML parts or another set. Nicolas Beck: „The system ensures a continuous flow of good parts and thereby more reliability in IML applications.“ According to Beck it is also possible in principle to retrofit all existing IML equipment of Beck Automation in the market.

Beck Automation with its long experience sets once again benchmarks in IML: Apart from the very high production speed of 3.2 sec. per cycle, the production cell impresses by the excellent process stability which is evident in e.g. the precise and fast positioning of the labels. Thanks to their perfect geometry the labels of Viappiani (Segrate/Italy) give the finished products a convincing appearance. Cup producers are yet more flexible in taking advantage of effective decorations, says Nicolas Beck: „Our system sets standards when it comes to Quality Assurance, process stability and output.“
Read more: Machines 478 In-mould labelling (IML) 42 Packagings 810