A 66,000 cans per hour canning line, three 144,000 bottles per hour bottling lines, 10 million hectolitres a year, 37 robots: these are only a few of the numbers describing the advanced new plant Grupo Modelo built in Piedras Negras, in Mexico’s Coahuila state near the Texas border.

The historic partnership between Grupo Modelo and the Sidel Group, ongoing for more than 20 years, played an important role in this innovative project.
For about three years, the two companies’ technicians and engineers worked side by side on every step in the project, from definition of the technical solution to final validation of the lines a few days ago: a collaboration that resulted in the construction of the world’s most highly automated factory, not only in the beer sector but in the beverage industry as a whole.

“Piedras Negras is our pride and joy, ideally representing Grupo Modelo before the world”, said Grupo Modelo Chief Operating Officer Daniel del Rio. “Our partnership with Sidel was very important for achieving this result, coordinating our requirements and the most innovative technologies”. Del Rio continues: “As we analyzed the structure and defined exactly what features the factory needed to have, Sidel accompanied us along the way, not only taking responsibility for filling and the wet part of the lines, but as coordinator of logistics and the dry part in general.” 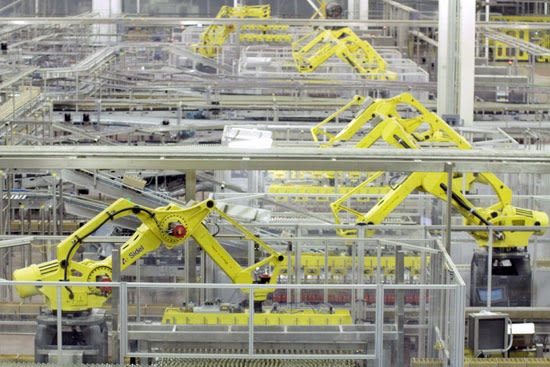 “PLAS permits efficient management of production and use of consumables on the line, as well as real time assessment of savings, to ensure correct functioning of the system as a whole,” says Daniel del Rio.

Its advanced know-how in the field of line engineering allowed Sidel to create a particularly compact layout, significantly decreasing the need for conveyor belts as compared to a conventional solution and bringing important benefits in terms of reduction of maintenance costs and electricity consumption.

Piedras Negras’ production is primarily directed to the North American market, particularly the central and eastern parts of the continent: markets demanding very high quality standards which can only be met by combining quality, efficiency and flexibility in production.

This is why Sidel wanted a highly automated solution. Piedras Negras has more than 50 robots, 37 of which were supplied by Sidel.

“There are more robots in Piedras Negras than in all Modelo’s other plants put together,” says Daniel del Rio. “The robots offer the utmost flexibility in changeovers, lower maintenance costs and greater continuity in production.”