2011-08-10
Tweet
It goes without saying that this exhibit, too, is characterised by its extremely energy-efficient operational approach. Engel pioneers energy-efficient drive technology and has set another milestone in the form of the servohydraulic Engel ecodrive, which is available for all of the hydraulic machines in Engel's product portfolio. Depending on the machine type and application, machines equipped with Engel ecodrive can save up to 70 percent energy compared with legacy, hydraulic machines, thus achieving consumption values that can compete with fully electric machines. The key to this impressive level of energy efficiency lies in reducing loss energy. While the machine is idle, during cooling phases for example, no energy is consumed. On top of this, ecodrive reduces the oil cooling overhead. Typically, the electrical energy component that is not delivered to the individual machine movements as kinetic energy is converted to heat and dissipated by the hydraulic oil. The oil temperature is thus an important indicator of a machine's energy efficiency.

For injection moulders in the telecommunications and electronics industries, Engel will be exhibiting an Engel e-insert machine at Fakuma, the electrified variant of the vertical Engel insert machine with a servoelectric rotary table and fully electric injection unit. The clamping process and ejection both rely on the servohydraulic Engel ecodrive.

Sensor housings for control electronics made of fibreglass reinforced polyamide with metal insert-place parts will be produced on an Engel e-insert 310V/100 using a 4 -cavity mould - this is an application that requires the utmost precision. The requirement is fulfilled on the one hand by the electrical injection unit, which guarantees an extremely high level of precision in insert-place part overmoulding, while the servo-electrically driven rotary table at the same time ensures excellent positioning accuracy and ultra-short rotation times. 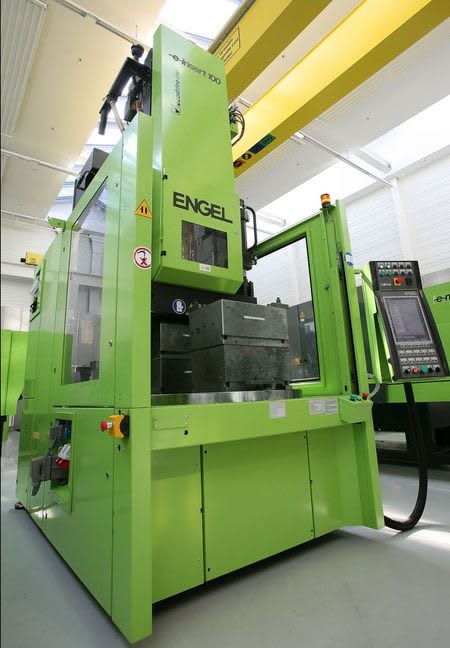 The Engel e-insert machine was presented for the first time at K 2010. But since then, two new software tools have been introduced to reduce the cycle time. The control unit calculates the required rotary table acceleration and braking ramps from the speed and other parameters, taking the mould weight into consideration, to optimally adjust the rotation time to match the current operating state and mould weight. At the same time, a specially developed control concept takes care of automatic positioning optimisation.

Automation is another highlight of this production cell. The sensor housings are taken off by a Stäubli six-axis robot whose control unit is fully integrated into the Engel injection moulding machine's CC 200 control unit without needing a Euromap 67 interface. This sets the Engel solution apart from the many other suppliers whose understanding of integrating multiple-axis industrial robots is that of simply mirroring the robot's user interface on the injection moulding machine's display, without removing the need for the users to familiarise themselves with the two different control approaches. The Engel product developer's primary goal is thus: if you can operate the injection moulding machine, you can operate the robot, too.

To allow for simple and fast programming and control of the robot, despite the complexity of the overall system, the control unit offers the users different user levels, from a simple view, to a fully object-oriented visualisation of the sequence. The industrial robot is programmed with the familiar and simple graphical instructions supported by the CC 200 control unit. The additional movement instructions for the multiple-axis robot integrate seamlessly with the graphical user interface.

From the point of view of the CC 200 control unit on the injection moulding machine, it really doesn't matter whether the machine cooperates with a linear device or a multiple-axis industrial robot. The control concept is identical for the two robot types. Besides ease of control and programming, the fact that the machine and the robot share data storage is another advantage of control unit integration which both improves efficiency and ensures a greater degree of process reliability.

The Engel Business Unit medical exhibit is also equipped with an integrated Stäubli type TX 90 six-axis robot. Disposable hollow needles for insulin pens are produced on a fully electric Engel e-motion 200/100 T injection moulding machine in a highly-automated process. The single-step manufacturing process is an innovation compared with legacy multiple step methods, which first manufacture the needle holder in an injection moulding step and then glue in the hollow needles. To save a complete step, as well as adhesive, the Engel solution uses a multiple-axis robot to remove the needles from the magazine and insert them into the 3-cavity pilot mould by Zahoransky, where they are overmoulded with polypropylene, before being taken off again by the multiple-axis robot.
Read more: Injection moulding 420 Machines 478 Fairs 864