Royal DSM is making a major move to substitution of die-cast metals and expensive high performance engineering thermoplastics like PEEK, with the launch of a new polymer at K 2016. ForTii Ace, a polyphthalamide (PPA) based on 4T chemistry, has an outstanding set of mechanical, thermal and chemical properties.

Automotive OEMs are expected to take around 200 kg on average out of every car they make by 2025, in order to meet increasingly stringent CO2 emission norms in major automotive markets around the world. Engine downsizing, designing with limited design space, without compromising on safety and comfort are the design challenges of today. DSM is convinced that ForTii Ace will have an important role in helping OEMs and their component and systems suppliers meet these CO2 targets.

"With ForTii Ace, DSM is taking an important step forward into die-cast metal replacement territory, enabling OEMs to replace metals in applications that have been too challenging up to now," says Konraad Dullaert, Global Business Manager for ForTii at DSM. "Target applications include powertrain, transmission, chassis, and thermal management applications. At the same time, many industrial applications now incorporating die-cast designs will also benefit from the properties of ForTii Ace as a replacement material," Dullaert adds.

For applications that need long-term strength at high temperatures

"We are targeting ForTii Ace at die-cast metal replacement applications that require a high mechanical performance that stays constant even at constant-use temperatures as high as 150°C, as well as superior chemical stability. Such applications may also have design space restrictions and/or NVH (Noise, Vibration, Harshness) challenges," says Dullaert.

ForTii Ace has a glass transition temperature - the point at which amorphous areas of a material begin to lose their rigidity and hardness - of 160°C, which is significantly higher than other polyphthalamides (including existing ForTii grades) and at least 80°C higher than PA66. It also has higher resistance to various automotive oils and chemicals, even compared with PEEK.

Most thermoplastics aimed at automotive diecast metal replacement exhibit a significant drop in mechanical performance when operating at temperatures over 125°C. "This is not the case for ForTii Ace, so this is a massive improvement," Dullaert notes. With its high glass transition temperature and high crystallinity, the mechanical performance and the heat-aging performance of ForTii Ace are superior to rival polyphthalamides based on polyamides 6T, 9T and 10T. "ForTii Ace is the only PPA with an aromatic content of over 50% by weight," Dullaert adds.

In fact, with their extreme chemical resistance as well as mechanical performance, some grades of ForTii Ace will even provide cost-effective alternatives to polyetheretherketone, PEEK, in selected applications. The ForTii Ace family will include grades with various types of fillers and reinforcements, including glass and carbon fibers at addition rates of up to 50%. 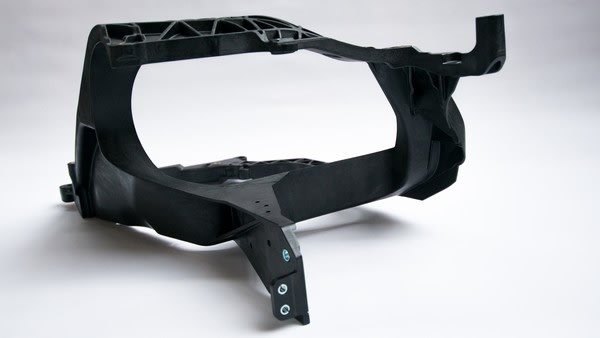