Bottled up frustration for PET

With tourism being significantly reduced since mid-March it is almost inevitable that there will be no ‘normal’ holiday season in 2020.  PET resin demand is expected to be reduced year on year in tourist heavy areas in 2020.

The effect that the coronavirus pandemic is having on the European airline industry is also severe. With governments restricting movement, airlines have almost no demand for their services. In March 58% of commercial flights in Europe flew versus 2019. By April, European airspace was virtually at a standstill with only 5% of commercial flights in Europe flying. The skies remained almost empty in May, the absolute number of flights increasing slightly but still a fraction of the number seen in 2019.

2020 had started off positively for the tourism industry in Europe. January and February numbers showed a 4% growth year-on-year in the nights stayed in tourist accommodation by non-residents. As the coronavirus pandemic worsened, all non-essential travel across Europe stopped. With limited travel options and most populations being encouraged to stay home, the tourism industry was expected to suffer an extraordinary decline in numbers.

The assumption that that the change in flights is directly proportional to the change in nights spent in tourist accommodation will be used as a basis to estimate 2020 tourism numbers. Three scenarios will be considered. Scenario 1 assumes flight travel and hence tourism will return to 60% of that in 2019 by December. Scenario 2 is more optimistic and 75% of air travel and tourism is expected to have returned by December and scenario 3 assumes that flight numbers and tourism returns to pre-coronavirus levels by October 2020. 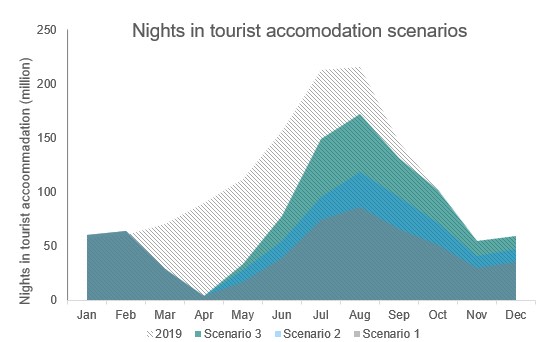 It was assumed that an individual who has stayed a night in tourist accommodation has consumed three PET packaged beverages per day[7]:


The overall quantity estimated may not be hugely significant, but the location of the demand is expected to be. Countries that typically see a substantial rise in tourism may lose out on beverage sales and hence PET resin demand. On the other hand, countries with populations that tend to leave their country of residence to holiday may well gain demand share back as many are forced to experience a staycation.

[5] May data extrapolated from data up to May 19th

[6] It was assumed that an individual who has stayed a night in tourist accommodation has consumed three PET packaged beverages per day with a weight of 25g.