2017-10-24
Quiet, low-pollutant, sustainable - we associate these with electro-mobility in general and with Tesla Motors in particular. KIEFEL GmbH in Freilassing, supplies the vacuum-laminating technology for the internal panelling of the doors of two Tesla models.

The Tesla Model X is increasingly gaining admiring attention on the streets. The electric SUV cannot be faulted: equipped with all-wheel drive as standard, with a range of up to 565 kilometres and space for seven adults with luggage. It achieves 0 to 100 km / h in just 3.1 seconds. The Falcon Wing doors are absolute eye-catchers. They elegantly open upwards, allowing the passengers to enter and exit in comfort.

In addition to the luxury Model X, the electric mobility company has now also created a compact and affordable electric vehicle in the golf class - the Model 3.

As different as the two vehicles are, the requirements for the interior fittings remain similar. They must be lightweight and fit into the two design concepts of the interiors. The interior door panels of both models are manufactured by machines designed by Kiefel. For the Model 3, Kiefel developed and registered for patent a vacuum-laminating technology. The technology allows film-free areas. Separate individual vacuum chambers ensure that the film only contacts the component at the areas to be laminated. The areas that will later be free from film are subsequently punched out and later supplemented with other applications such as, for example, leather inserts.

For two years, the natural-fibre-reinforced polypropylene door carrier part of the Model X has been given its surface of a TPO film with foam backing using vacuum-laminating technology on an inline Kiefel machine with the associated vacuum lamination tools. Kiefel's machines and tools also handle the next process step, the so-called edge-folding.

All joints must have a uniform perfect appearance. A challenge that is met to full satisfaction.

What worked well with vacuum-laminating and edge folding technology with the low unit numbers of the Model X is now also proving itself with the higher production figures for the Model 3. Four inline vacuum-laminating systems - two of which are located in California, two more in Mexico - are used for the panelling of the compact electric vehicle. In just 50 seconds, these systems laminate the film onto door frames and door upper panels. 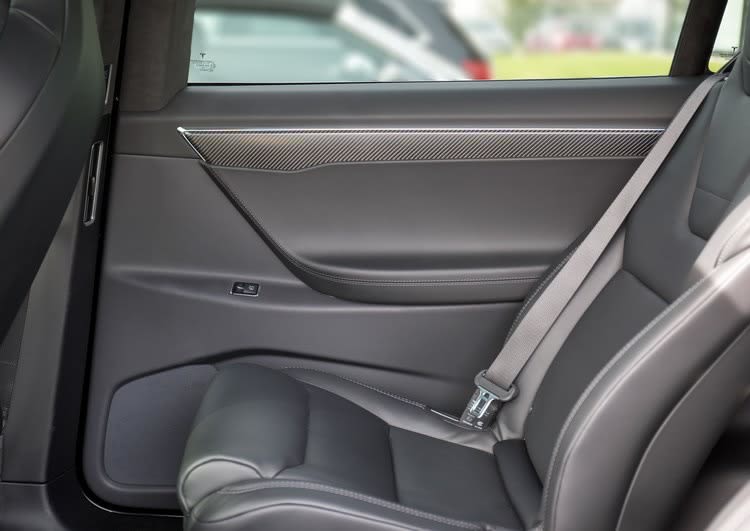