2016-09-02
BOPET film is one of the fastest growing polymer substrates with demand expected to top 4 million tonnes this year, a growth of over 1 million tonnes since 2010, according to a new report from leading industry consultants, AMI Consulting. Market demand has been driven by its extensive use in both packaging and technical applications thanks to its unique combination of properties, excellent processability and adhesion to coatings and adhesives.

The versatility of BOPET films combined with rapid end-use technology developments creates emerging opportunities for BOPET but it also comes with certain volatility. The rapid demise of BOPET-based magnetic tapes for music and video cassettes following the development of CDs is an example of how applications can come and go. At the same time though new applications continue to emerge. Photovoltaics is the fastest growing application which has seen growth of 29% per year since 2010 driven by an increased demand for renewable energy sources often supported by government initiatives. Display and optical films is another application which has seen double digit growth driven by expanding sales smart phones, tablets and flat screen TVs.

In terms of absolute volume growth, packaging has grown the most which is most evident in emerging markets, particularly in China and India. However, the increasingly competitive and commodity nature of traditional packaging film markets is driving producers to seek added value opportunities through either diversification into thick films, technical applications or investment in secondary processing such as metallisation or offline coating. New investments are increasingly in hybrid lines capable of making a range of films that cut across the traditional supply divisions between thin films (<50 micron) and thick films (50-350 micron) as companies look to diversify their portfolio.

Strong growth in demand led to tight supply and relatively high margins in 2010-11, resulting in a boom in investment in the BOPET business. This has driven an explosion in new capacity in recent years, with an additional 2.4 million tonnes installed since 2010. However, while global capacity increased by over 70%, demand only increased by half that rate which has led to significant oversupply.

This oversupply scenario combined with the falling crude oil prices have resulted in weak pricing and poor margins making the operating environment for BOPET film producers increasingly challenging. "Much of this new added capacity has derived from high productivity low-cost operations with a focus on flexible packaging applications," says AMI Consulting Senior Market Analyst Márta Babits. “This has put pressure on heritage businesses with older and less efficient assets particularly for the production of low-cost commodity grades in developed markets of North America, Europe and North East Asia.” The industry has seen many of these companies shifting their focus on specialised technologies and high-end added value applications. At the same time, some, such as DuPont Teijin, have decided to close down obsolete plants as part of cost cutting measures.

The structure of the industry is becoming increasingly fragmented driven by the entry of emerging new players in recent years. The Top 10 producers accounted for over 60% of the total production ten years ago and for less than 50% today while there are many more manufacturers holding smaller market shares. The largest producers worldwide include DuPont Teijin Films, Flex Films, Jiangsu Shuangxing Color Plastic New Materials, Mitsubishi Polyester Film, SKC Films and Toray Films.

AMI Consulting forecasts that demand overall will reach 5.2 million tonnes to 2020, a CAGR 2015-20 of 6%, but growth in some developing countries will be well above the average. "The industry will continue to bring value added opportunities but to maintain market power, industry players need to anticipate change and formulate response strategies quickly and direct R&D investment accordingly" concluded Márta Babits. 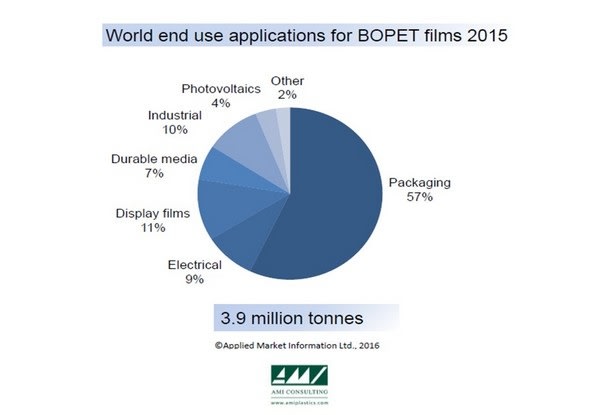