It is time for a new era in mobility. The cars of the future are electric, fully connected and CO2-neutral. Electric drives and autonomous driving are fundamentally changing the design of the cars of the future, and the same applies for lighting. “Light design will become ever more important in electric and autonomously driven vehicles: Light signals are evolving into information carriers. In addition, light in the vehicle interior conveys a new driving experience in the new era of mobility,” comments Siamak Djafarian, Head of the Molding Compounds business unit at Röhm GmbH.

As the manufacturer of Plexiglas molding compounds, the company is an experienced partner to the automotive industry, in particular when it comes to vehicle lighting solutions. This is also the case for the futuristic ID. Roomzz concept car from Volkswagen, in which light is an important design element in both the interior and exterior of the vehicle.

Volkswagen’s ID. Roomzz is turning a vision of the new mobility into a reality. The spacious mid-sized SUV is the latest addition to the ID. family of electric vehicles produced by the German car manufacturer and can be driven either in manual or autonomous “ID. Pilot” mode. ID. Roomzz is set to be released in China as early as 2021 and will then go into series production worldwide.

“This SUV is a monolith, appearing to be seamlessly machined from one solid block.” With these words, Volkswagen Chief Designer Klaus Bischoff presented the concept car at its world premiere at the Auto Shanghai trade fair. Nian Koukou and Nicolas Ruhault, both light designers in the Exterior Detail Team at Volkswagen, and Color and Trim designer Diana Zynda describe how the concept of flowing lines throughout the car chassis was also implemented in its light design: “The 360-degree concept is a key element of the new design language of the ID. family.”

The front lights and taillights both extend across the entire width of the vehicle as horizontal lines. Illuminated touch-sensitive panels for opening and closing the doors function as a visual link between the front and rear of the car – and were made using Plexiglas Satinice covers for the concept car. This material scatters light homogeneously and provides a pleasant look and feel with its satin-like surface.

“Light is the new chrome” is the memorable claim of the Volkswagen Chief Designer, heralding the new era of automobile design. The distinctively contoured lights at the front end of the ID. Roomzz demonstrate exactly what this means: A double horizontal line with the illuminated Volkswagen emblem at its center forms the striking signature light, with the top line enclosing the LED headlights.

Volkswagen has given the imposing SUV from the five-meter class a friendly “face” with this design, as light is also an emotional element. “The vehicle should look likable,” stresses light designer Koukou.

Djafarian explains: “Complex light concepts such as this one allow Plexiglas to unleash its full potential, as it can be used for various lighting applications in and around the automobile, guarantees the homogeneous scattering of light and enables flexible design that underlines the monolithic overall impression.” On the ID. Roomzz, for instance, the brand polymethyl methacrylate from Röhm can be found in the two horizontal LED lines. The covers of the daytime running lamps and the illuminated VW emblems on both the front and rear were made from Plexiglas with an optical coating, which makes them appear even brighter. 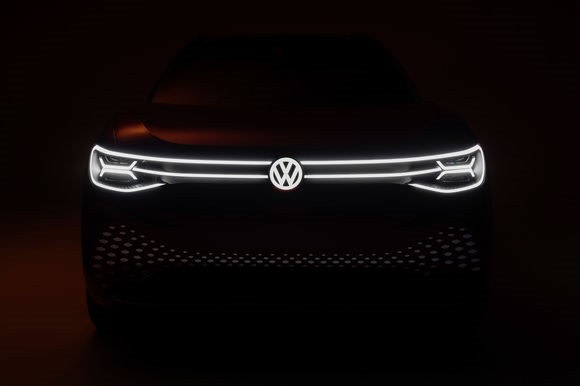