Lightweight, paintable components in one step

2018-06-07
Fibers as fillers are familiar - but are hollow glass microspheres? Along with weight reduction and lower warpage, they also provide immaculate surfaces. At the KraussMaffei Competence Forum as part of the company's 180th anniversary, visitors can witness proof of this in the shape of a vehicle spoiler. The spoiler will be produced on an MX 1600 with a clamping force of 16,000 kN.

Whoever sees the component at the Competence Forum as a linear robot takes it out of the MX 1600 will not notice anything unusual initially. It is comparatively lightweight and has an immaculate surface without flow lines. "Its secret is on the inside. Hollow microspheres with an average cross-section of 20 µm are embedded in the PP plastic. They are made of chemically stable borosilicate glass," explains Andreas Handschke, Product and Technology Manager at KraussMaffei. Since the beginning of the year, A. Schulman has been providing the granulate in collaboration with 3M, who is the manufacturer of the powder filler. The size of the hollow glass microspheres determines their pressure resistance (up to 1100 bar) and, as a result, the material's mechanical property patterns. With an increasing percentage of glass particles, the stiffness of the component increases, while shrinkage is reduced and, as a matter of course, weight as well.

Because high pressure resistance is generally required in injection molding, rather small diameters are used, which is also beneficial for the surface finish. Unlike many foam and fiber technologies, the hollow glass microsphere process delivers paintable products. The thermal properties of the microspheres can also imply shorter cooling times.

"In order to make the spoiler shine perfectly in the vehicle's color later on, it is necessary to prevent visible errors on the blank already. This is a challenging task for cascade injection molding," says Handschke. Therefore, the FlexFlow needle shut-off system from HRS, our partner, has an electric servomotor-controlled system that is completely integrated into the MC6 machine control system of the MX 1600. This not only allows for positioning the FlexFlow control system outside of the reach of the machine, but it also makes operating the entire system easier.

Unlike hydraulic and pneumatic systems, in which the needle shut-off can only occupy the start or end position (open or closed) within a defined stroke, the FlexFlow offers the option to control the individual needles independently of each other regarding their position and speed. Through the profile-like opening and closing of the needles, pressure peaks are avoided and the typical fluctuating pressure profile gives way to an optimally consistent pressure curve. As a result, flow marks on the surface of the component can be avoided. There are more advantages. The controlled pressure allows for a reduction of the clamping force by up to 20 percent and, due to optimized holding pressure, for a reduction of the part weight by up to 5 percent. "The MX 1600 illustrates trends toward both lightweight construction and high-end surfaces," Handschke summarizes. 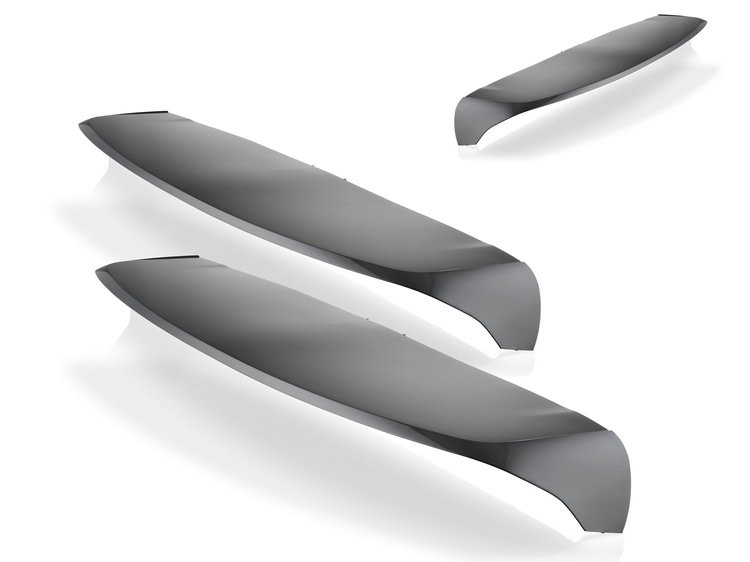 The spoiler being processed on an MX 1600 is impressive thanks to its reduced weight and immaculate, paintable surface
Source: KraussMaffei
Read more:
Injection moulding 576
Polypropylene (PP) 205
Fibreglass 13
Automotive 295