2011-08-29
Tweet
KTM PowerSports has recently disclosed an electric vehicle concept in collaboration with Austrian Institute of Technology and has named it KTM E3W.

The car was lately shown to the Federal Ministry for Transportation, Innovation and Technology and the Federal Minister Mr. Doris Bures. The EV concept got appreciation from the minister because of its sleek design and environment friendly mechanisms.

The pod shaped, two-seater is an entirely electric car car and its body is made up of plastic which has helped in bringing down its weight to a mere 500Kgs. The car has been designed by studio Kisha. The motive behind building the concept car was to make something environment friendly, which is savvy and useful also. The car is so designed that it can easily maneuver itself in congested areas without any problem. The doors of the car have been designed as scissor styled, the ones you find in Lamborghini. These doors are meant for easy access amidst crowdie areas and parking.

The car is powered by a 15KW electric motor along with a lithium-ion battery pack that enables the car to have a full charge range of almost 100Km. If this concept car comes on production floor then there is a strong possibility that it will give a tough competition to Renault Twizy in Europe and other parts of the world. The makers of the car, KTM PowerSports, are planning to set up some alliances in the future to build more samples of E3W and are hopeful that they will be able to launch it in market by 2013.

According to hearsay, the car will be priced somewhere between $7000-$11,000 and the company is working in this direction by preparing itself to manufacture around 50,000 three wheeler car annually. 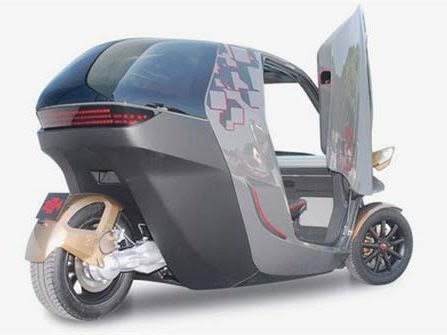