IML premiere for the perfect decoration of drinking cups

2010-08-27
Tweet
At K 2010 Beck Automation is presenting IML thin-wall cups made from polystyrene with labels printed on both sides.

At K 2010 Beck Automation AG, Oberengstringen (Switzerland), is exhibiting for the first time a thin-wall cup made from highly transparent polystyrene in which the decoration is visible from both out- and inside. The Swiss IML automation experts have set a new benchmark for four cups per shot with a cycle time of 3.0 seconds.

The high speed of Beck’s automation results from the interactions within a production cell made up of a Netstal Elion 1750-840 injection moulding machine, cooling technology from EF Cooling and a mould supplied by Glaroform. The plasticizing unit in the injection moulding machine charges the four-cavity mould from Glaroform with a shot weight of 41 g. The single thin-wall cups have a wall-thickness of 0.5 mm and a net weight of 10.25 g.

Beck’s automated unit handles the labels from the label magazines by means of horizontal lateral movement, inserts the labels in the cavities and after injection takes out the finished cups from the mould. Beck Automation’s experience once again sets standards in IML (In-Mould Labelling). In addition to the enormously high speed of a 3.0 second cycle time, the production cell impresses with its customary process stability. This is exhibited by the precise and rapid placement of the labels.

Viappiani’s labels given their perfect geometry and their precise captures at these high speeds achieve a convincing look. According to information from Beck Automation a decoration is being shown at this level for the first time, where labels printed on both sides are being used. Accordingly, manufacturers of cups can exploit more flexibility in decoration. 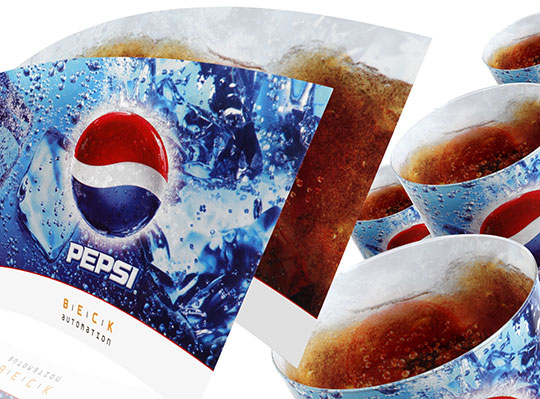