2012-09-14
Tweet
On each parting line of the cube mold, eight pairs of parts – the top and the bottom of a twist top – are produced in parallel. Following a 90° turn of the cube mold, the two parts are assembled by automation on the operator and non-operator sides of the machine. This action happens while the next set of parts is being injected. Two robots remove the twist tops and place them in an Air-Move-System from Trio-technik (Meinerzhagen, Germany) for removal. The total shot weight is 88 g, or 11 g for each twist top. The cycle time is just 7.5 seconds.

The real showstopper of this application is a tiny drink powder chamber in the upper piece, which is sealed shut after the two parts are assembled. The first time the twist top is opened, the chamber is unsealed, dropping the powder into the bottle. This closure can be used, for example, for isotonic drinks or medications that should be freshly mixed before consumption.

Fakuma will see the public unveiling of the second-generation all-electric Elektron series. The Elektron is a global machine series produced by Milacron and is available in nine sizes ranging from 500 to 4,500 kN with nine injection unit sizes from international size 55 to size 3,470. 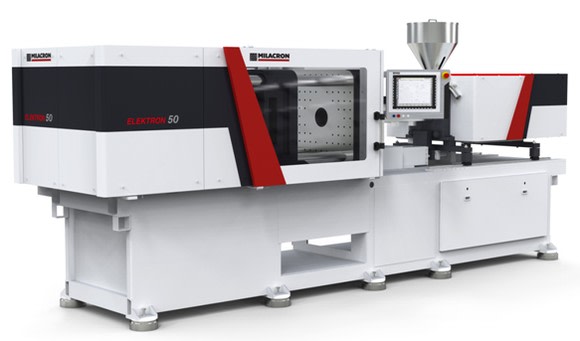 The first thing that strikes the eye is the new design, reminiscent of the F-Series. The machine is white, suggesting cleanliness. A horizontal grey band around the machine emphasizes the core machine functions. The signature marks are the two red fins on the clamping and injection units.

The next innovation is the new control panel, which was developed especially for the Elektron series and optimized for cost and performance. The new controls have a large 15” touch screen surrounded by clearly marked buttons.

Visitors to Fakuma will see an Elektron 50 with a clamping force of 500 kN specially set up to work with liquid silicone (LSR). The machine features an international size 55 injection unit including a special plasticizing unit and a silicon screw with a diameter of 22 mm. “Because of its unique characteristics, LSR is a very versatile material for many applications,” said Sven Engelmann, head of applications & systems at Ferromatik Milacron. “All of the injection molding machines at Ferromatik Milacron can easily be set up for silicone molding.”

The liquid silicone consists of two components which are mixed 1:1 in an all-electric plasticizing unit made by Reinhardt-Technik (Kierspe, Germany). The material is then fed into an LSR plasticizing unit temperature controlled to 12°C. From there it is injected into the 200°C heated mold. The mold was built by Emde Industrie-Technik (Nassau, Germany). The heated mold vulcanizes the previously cooled material and makes it irreversibly solid. Herein lies the fundamental difference between LSR (a thermoset material) and recyclable thermoplastics: with plastics, hot material is injection into a cooled mold and parts solidify through the cooling process.

At Fakuma, the Elektron 50 will produce two transparent baby pacifiers in a single shot, made entirely of silicone. The shot weight is 20 g. In contrast to conventional two-component pacifiers (ABS and LSR) all-silicone pacifiers are manufactured as a single part, reducing production costs. The material is fully elastic and is especially calming for young ones.
Read more: Injection moulding 421 Technologies 301 Machines 478

Fakuma 2012
The International Trade Fair for the Plastics Processing