The Upper Austrian company EREMA Engineering Recycling Maschinen und Anlagenbau Ges.m.b.H. can look back on a highly successful time both leading up to and at the K trade fair. The trend of a rapidly increasing volume of order intake that began before the trade fair has continued relentlessly. And the expansion of the company's infrastructure is also making progress with a new customer test centre due to be completed by mid-2011.

The company recorded orders amounting to around EUR 38 million placed within 12 weeks – a success never achieved before in such a short space of time. More than a third of this volume is accounted for by the K trade fair, with the number of orders far exceeding the figure achieved at the previous K show, making K 2010 the most successful K fair ever in the history of EREMA. "The intensive preparations have paid off. Over 1,600 registered contacts at the booth and an extremely encouraging all-round trade fair performance means that we can look back at the show with a certain feeling of confidence and satisfaction," says CEO Manfred Hackl. 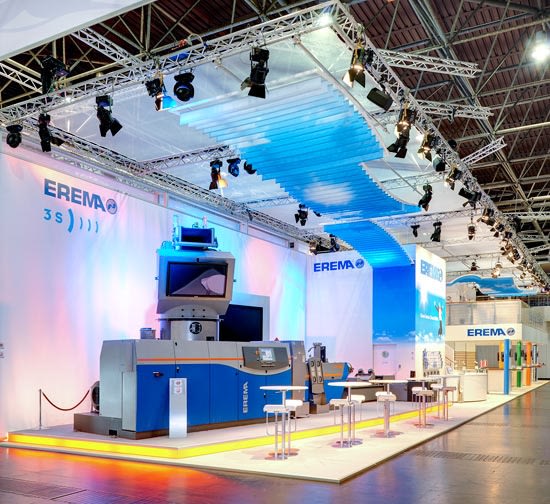 The EREMA 1310 TVEplus that was on show at the trade fair stand aroused a great deal of interest and was confirmed by positive feedback. This system stood out through its many innovations. The focus was on the new process engineering, ecoSAVE technology, a new pelletising system and significant advances in the maintenance-friendliness of this recycling system and its components. However, there was also keen interest in the other products of the EREMA Group such as the VACUREMA technology, EREMA T and TE, KAG, COAX and melt filter. These solutions were presented at ingenious product stations, an idea that was very popular among the visitors to the booth.

The future, of course, will also be decisive for the continued success. And this future has already begun for EREMA. The new building for the company's own customer test centre was planned and fixed prior to the K fair and the ground-breaking ceremony coincided with the beginning of the show.

"This investment will mean that in the future it will be possible to have test runs for customers and other people who are interested in a different building to where we carry out internal development tests. On the one hand this gives us the opportunity to raise the quality of the numerous test runs to an even higher level. On the other hand we will also be intensifying our activities in the field of research and development as a result. We still see targeted innovations and developments as the driving force behind what we do," explains Manfred Hackl, with a clear sparkle in his eyes.

Once the customer test centre has been finished – which is planned for the first half of 2011 – seven complete test facilities will be available. A further five systems are available for research and development. And EREMA is looking forward to the sparkle in the eyes of the people who benefit from them which will come at the opening ceremony at the latest.