The company headquarters are at the focus for investments
Altogether, Engel is investing almost 100 million euros in different company locations in the 2016-2017 financial year. The largest part will remain in Austria. Construction work on a significant expansion of the company headquarters in Schwertberg has been underway since the summer of last year. While construction was still ongoing, the scope of the expansion was enlarged. Instead of two, the new building will now have three upper floors. The new building is connected with the technology centre that was completed in 2009 and provides more than 10,000 square metres of floor space. Of these, more than 6,000 square metres are reserved for new offices to strengthen the sales and service teams. A new apprentice workshop is being built on approx. 1,300 square metres, and around 300 square metres will be available for day nursery facilities.

In September, the day nursery will be the first to move into the new building, followed by the Engel apprentices. The machines for the new apprentice workshop will already be installed in July. The apprentice workshop at the company headquarters is already one of the most modern in the country and has received numerous awards. In time for the start of the next school year, it will gain even more on attractiveness. "We want to provide optimal working conditions for our staff from the first day on," says Peter Neumann. "With lots of daylight and an open room atmosphere, the new apprentice workshop will provide an even brighter working environment. Beyond that, the workplaces are designed according to the most recent ergonomic findings."

More than 150 young men and women are receiving training in eight technical professions at Engel in Austria. With a retention rate of 98 percent, the in-house professional training is an important factor in terms of securing skilled workers. The apprentice workshop in Schwertberg serves as a model for the worldwide apprentice trainee programme of the Engel Group. Engel also provides training in technical professions at its German site in Hagen, at its component plant in Kaplice in the Czech Republic, and at its large-size machine plant in Shanghai, China.

With its own childcare centre, Engel is making it even easier for its staff to balance family and professional obligations. There are already 13 children registered for the day nursery although it has not opened yet, and interest continues to be high. In the future, two groups of up to 24 toddlers up to age three will be cared for. The day nursery will have its own garden that will not only serve as a playground, but also provide space to grow its own vegetables for the breakfast breaks.

Further building measures for the Schwertberg site are already in planning. The focus lies on increasing capacities for assembly. Among other things, the North Hall that was built in 2013 will be expanded. "More space will be created above all for the middle clamping force segment," says Stefan Engleder. "Another area of focus for the planned investments is the customer technology centre. In the future, we will have even greater capacities for customer trials and technology demonstrations in Schwertberg." 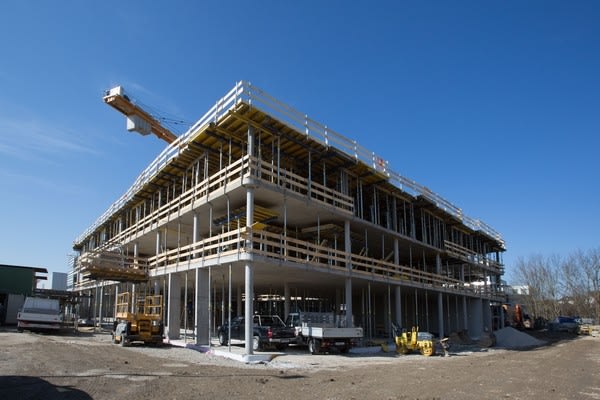 The Engel Center for Lightweight Composite Technologies located in St. Valentin will be provided with more space in the course of expanding the facilities at that site. A second, even larger Engel v-duo machine was already taken into operation at the technology centre in the spring of this year. Now the facilities can cover an even broader spectrum of fibre composite material applications for Engel's own development tasks as well as for projects with customers and partners.
Read more:
Injection moulding press/machines 736
Financial results 77
Investments 487