While process integration offers advantages for many multiple component applications, it is not necessarily the most efficient solution. In addition to the requirements of the part being produced, the planned lot size, conditions on site and the existing machinery are also important when choosing the best fabrication process. One alternative to production with a multi-component mold and an integrated manufacturing cell would be to utilizing a transfer process to link two, or more, injection moulding machines with a linear robot. The transfer process is advantageous when standard technology satisfies the production requirements, as opposed to making customised specialty machines necessary. Engel demonstrates what this can look like in practice with the production of double-ended wrenches on a system using two Engel e-mac 170/55 US machines with four-cavity moulds from Roembke (Ossian, Indiana, USA). The wrenches are made of carbon-fiber-reinforced polyamide which is over-moulded with silicone between the two ends for better grip. The part is injection moulded on the first machine in the cell, removed by an Engel viper 12 linear robot and immediately placed in the mould of the second injection moulding machine which is situated opposite. During the processing of the liquid silicone, the first machine has begun production of the next wrench.

The compact size of the all-electric Engel e-mac machines provides a space-saving solution for the production of technical parts with high demands on precision. As a result, the productivity per square foot of production space increases, which has become a key figure for efficiency in an increasing number of businesses.

The Engel e-mac injection moulding machines provide extremely high repeatability, and reduced cycle times with parallel movement of the different drive axes. From injecting and metering to mould and ejector movements, all drives in the Engel e-mac are servo-electric. This guarantees the best possible precision and process stability while maximizing the effectiveness of the machine as a whole. The drives are operated by a modern axis system solution involving a stabilised intermediate circuit in which the braking energy is recovered and fed back into the grid, thereby achieving very high energy efficiency. The Engel e-mac achieves a very high acceleration of up to 20 m/s² on the injection axis, setting new standards around the world. 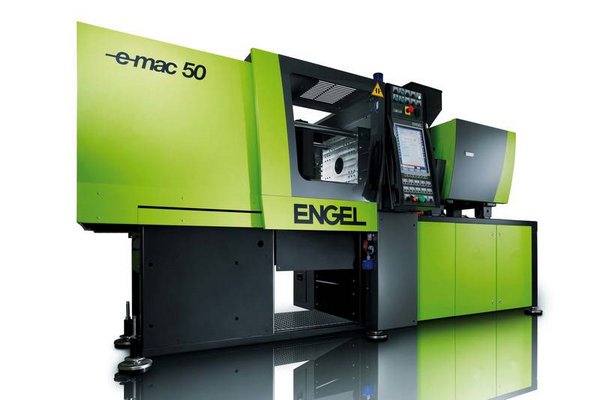 It is often useful to make use of gravity for insertion applications. During the trade show, Engel will be producing connector housings on a vertical Engel insert 500H/110 rotary US injection moulding machine. In order to overmould the metal pins directly, an Engel easix robot will take four sets of metal pins from the feeding unit and place them in the bottom half of the four-cavity mould, which has been provided for demonstration at the exhibition by Capsonic (Elgin, Illinois, USA). Once again, with this application the multi-axis robot demonstrates its high positioning accuracy. The precision of the robots movements is crucial for final product quality in many insertion applications.

The injection moulding machine operates with a rotary table equipped with two work stations. The metal pins are put in place parallel to the injection process, which not only makes for short cycle times, but also ensures high energy efficiency. Since all part handling takes place outside of the clamping unit, the mold only remains open for a very short time during rotation of the table, eliminating unnecessary heat loss.

The complete automation of the manufacturing cell was designed and built by the Engel automation team in York. In order to pose a challenge to the flexibility of the Engel easix robot, two different and independent feeding systems have been integrated, and will be in operation on an alternating basis at the exhibition. The robot must repeatedly adapt itself to the changing demands of the process and yet still fulfill all its tasks with consistently high precision.