2011-06-10
Tweet
Engel was able to draw an extremely positive balance after this year's Chinaplas in Guangzhou, PR China, at the end of May. Almost all showcased machines had already been sold by the end of the trade fair. Never before had the injection moulding machine manufacturer and automation expert recorded more visitors at its stand than this year.

"Chinaplas 2011 was a record event for us," says Gero Willmeroth, Sales Manager at Engel Machinery (Shanghai) Co. Ltd. "It was a clear signal that we are pursuing the right market strategy in Asia. Over the past few years we have continuously expanded our market shares in Asia, and we want to continue this trend." As the sole European injection moulding machine manufacturer, Engel displayed only locally produced machines at its stand. A total of six applications were presented at the trade fair.

"Decentralised production guarantees short delivery times to our customers, short time-to-market and the ability to adapt our machines, automation and technologies to the specific requirements of the Asian market," Willmeroth points out. In order to satisfy growing demands in Asia, Engel is currently doubling the capacity of its large-scale machine production facility in Shanghai to 200 machines per year. Small to mid-range machines for the Asian market are built in Korea. 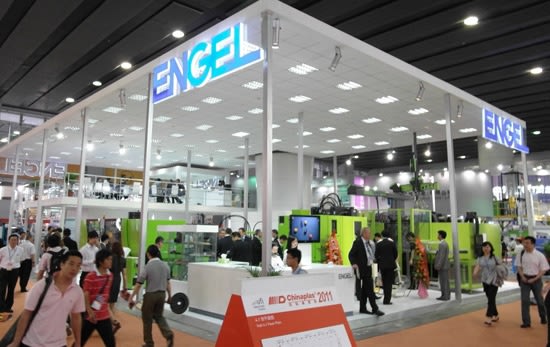 Besides the increased number of visitors, a further trend was identified at Chinaplas: an increasing portion of visitors are from abroad. This year many decision-makers from other Asian countries, but also from the Middle East and South America, called at the Engel stand to obtain information. There was a conspicuously strong interest in system solutions for medical technology.

For this industry Engel demonstrated the manufacture of cylinders for 2 ml syringes on an Engel victory 1050/160 in a 32-cavity mould of Swiss mould maker Schöttli, thus showing that high-precision, thin-wall applications are also possible with Engel standard engineering technology. A substantial reduction in wall thickness compared to legacy syringes guarantees a considerable reduction in material use and cycle times. Fitted with the servo-hydraulic Engel ecodrive, the showcased Engel victory machine thus achieves energy consumption figures which can compete with those of fully electric machines.

The conservation of scarce resources is fast gaining importance in China. Energy efficiency was one of the top themes at the trade fair. The Engel duo 5550/700 large-scale machine, which produced engine covers at the Engel stand, was fitted with an ecodrive. With the servo-hydraulics, available as an option for all hydraulic machines from the Engel production programme, the energy consumption of the machines – depending on application and machine type – can be reduced by up to 70%. The servomotors operate with a fixed displacement or variable capacity pump, instead of a permanently running asynchronous motor, so that the speed of the machine is directly related to the rpm. During standstill times, cooling phases for example, the machine does not consume any power at all. In addition, cooling water consumption on the oil cooler is reduced to a minimum, in many cases to zero. The oil temperature is an indicator of the energy efficiency of the machine.

The Engel duo machine was presented in Guangzhou as a complete manufacturing cell including automation. An Engel viper 40 type linear robot removed the engine covers from the mould. Thanks to new software features, the Engel viper robots operate with the highest degree of efficiency and productivity. 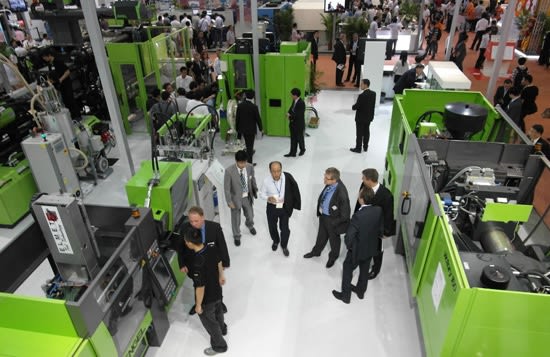 Furthermore, at its trade fair stand Engel demonstrated the manufacture of LED leadframes on an Engel insert 80V/60 injection moulding machine, as well as the production of sealing rings of liquid silicone on a fully electric Engel e-max 200/100. Another Engel e-max machine was on display at the stand of Engel partner Max Robot of Yuyao City, Zhejiang, China. Here mobile phone shells were manufactured by thin-wall technology with insert parts. A second Engel partner, Hi-More Pte. Ltd., Singapore, demonstrated the manufacture of cups on an Engel e-max 100. The machine was equipped with in-mould labelling.

With a total of six exhibits, Engel once again demonstrated its system competence in Guangzhou. From the machine, automation and process technology to training and service, Engel covers the entire spectrum of injection moulding technology worldwide. Engel maintains three sales and service subsidiaries in China: in Shanghai, Beijing and Shenzhen.
Read more: Machines 478 Injection moulding 420