2012-01-13
Tweet
Antimicrobial metal coatings are one option. The Hygiene Institute at Leipzig University has found out that the survival rate of, for example, Escherichia coli (which as EHEC causes diarrhoeal disorders), Pseudomonas aeruginosa (see above), Staphylococcus aureus (see above) and Candida albicans (mucous membrane infections; pneumonia) is only half as high on chromium/nickel compounds we call stainless steel as it is on plastic.

The mortality rate of Escherichia coli on stainless steel is apparently more than 99 per cent after two hours’ drying time. Other germs, on the other hand, such as the dangerous MRSA, survive on stainless steel for several days. Copper can deal with them better; in laboratory studies, MRSA died within two hours on high-density copper coatings.

The germicidal properties of copper have, incidentally, been known since ancient times. The Greeks and Romans used copper vessels for drinking water to disinfect it and to keep it free from germs. 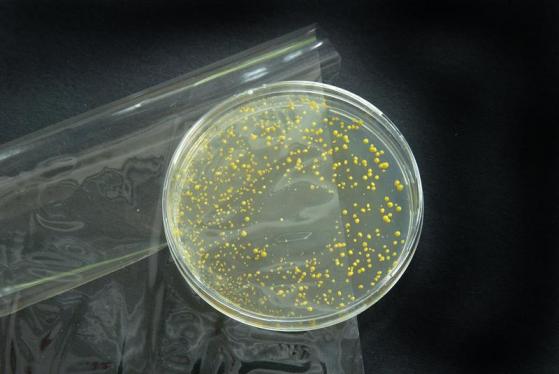 What are known as sol-gel coatings can even be sprayed on or applied via immersion baths. Geometrically complex objects are easy to provide with antimicrobial surfaces in this way too.

Compounding goes a stage further: plastics themselves are given antimicrobial properties while they are still being manufactured when additives are included in the process. For this purpose, germicidal substances are, for example, incorporated in polyethylene, polypropylene or polyamide, where they then have a disinfectant function thanks to the ongoing release of ions.

Not only zinc oxide but also and above all silver are used in this context; the Chinese were already making acupuncture needles from the latter thousands of years ago. In addition to silver tableware and containers, silver coins were a popular disinfectant up to and including the 19th century, being put in water or milk.

Modern processes are based on sterilising silver ions that diffuse from the material matrix to the surface and have an antimicrobial effect there: the cell membrane is destabilised, while metabolism and reproduction are disrupted at the same time, so that the microbe population is destroyed.

Since each kilogram of plastic contains a few hundred milligrams of silver at most, enhancement by the noble metal component remains inexpensive.

Polymers that in themselves already have antimicrobial properties, such as polyammonium salts or polyethylene glycol, manage without such additives.
Read more: Plastics 601