2011-03-15
Tweet
Plastics have been used to increase food production and conserve water for 50 years in horticulture and agriculture: the demand in this market was 2.8 million tonnes in 2009.

Film applications include greenhouse (31%), mulch (45%) and silage (24%). Asia is by far the largest market, followed by Europe. Reynolds was speaking at the AMI conference on Agricultural Films held in November 2010 in Barcelona.

As food security becomes a global issue, plastics can be used in developing sustainable, high levels of production. The International Federation of Agricultural Producers (IFAP) has reported that farm output needs to double by 2050.

The 2008 UN Population Report outlined trends worldwide from 2009 to 2050, including an increase in North and South America, Africa and Asia, with a fall in Europe, and predicted that overall the global population will rise from 6829 million in 2009 to 9149 million in 2050. BSK Plast Pack & Agrarservice und Trade has studied this report in relation to plastics demand: Europe, Japan, and the Anzac nations are relatively mature markets, whereas Brazil, Mexico, China, India and Russia are rapidly growing and want to increase productivity in agriculture. In Europe there is expected to be competition for crops grown for energy (principally bioethanol) and for food. EU Directive 2003/30 states that by 2020, 10% of fossil fuels must be replaced by biofuels. 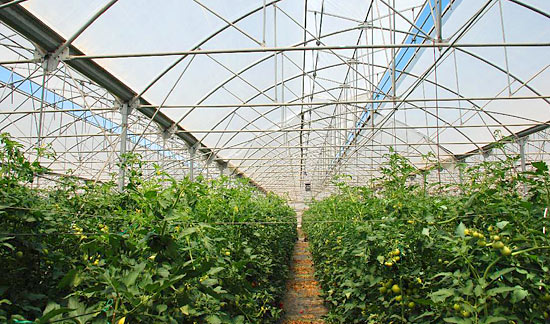 This will change demand for plastics, for example, packaging silage for animal fodder versus packaging for fuel conversion. A large amount of crop will have to be packed, stored and transported for the new industry and the plastics processors will need to adapt to requirements.

Professor Pietro Picuno of the University of Basilicata has reviewed environmental aspects of the use of plastics in agriculture: the major uses are for protection from wind, hail, snow and heavy rainfall in fruit and ornamental plant production, and to create a better microclimate for production.

In Southern Italy there is increasing use as protection for crops like vines and kiwi fruit grown in the traditional structures.

There is a need to develop covers with lower visual impact in tourist regions where large areas are under cultivation. Plastics waste is another issue as film covers degrade over time, so the LabelAgriWaste project was set up to encourage labelling and recycling of used plastics.

As productivity increases alongside environmental awareness, there has been a move towards sulfur based pesticides according to BASF. Sulfur is commonly used as a fungicide for grapes, strawberries and vegetables, and is the primary agrochemical for organic production. A BASF study of agricultural films collected from different regions showed that plasticulture countries like Spain and Morocco have a major percentage of films exposed to sulfur levels in excess of 1500 ppm.