Another absolute highlight of the event was the MicroPower 15/10H/10H, the first multi-component model of the MicroPower series from Wittmann Battenfeld designed for injection molding of small and micro parts. On this machine, equipped with two parallel injection units and a rotary disk, a 2-component micro part made of POM was manufactured with a single-cavity mold supplied by Ortofon, Denmark. The machine was also equipped with a fully automatic camera system and a W8VS4 Scara robot from Wittmann for fully automatic parts removal.

The second MicroPower showcased at the event also came with a novelty. This machine, a MicroPower 15/10, on which an electronic plug was made of PBT was produced using an 8-cavity mold from Küng, Switzerland, was equipped with the very first hot runner ever installed in a MicroPower.

Furthermore, a hybrid machine model, a MacroPower E 500/2100, was exhibited in the Viennese trade fair hall. The MacroPower E Hybrid consists of a modern, servo-hydraulic 2-platen clamping unit combined with an all-electric, high-speed injection unit. This has made it possible to build an extremely compact large machine with a minimal footprint, which simultaneously offers maximum precision and energy efficiency with injection speeds of up to 450 mm/sec. On this machine, the IML process was demonstrated by manufacturing a 10-liter bucket from PP with a single-cavity mold. A high-performance IML system with a W842 pro top-entry robot from Wittmann was used for insertion and removal of the labels and stacking the buckets.

SmartPower - with Cellmould technology for the first time

Wittmann Battenfeld continued its presentation of innovative products to celebrate its 40th anniversary with a machine from its new servo-hydraulic SmartPower range, a SmartPower 240/1330. For the first time an application using both the Cellmould structured foam process and BFMOLD mold technology was demonstrated on a servo-hydraulic SmartPower by producing a panel for the automotive industry with a high-gloss surface. The parts were removed and deposited on a conveyor belt by a Wittmann robot from the new pro series, a W833 pro.

Wittmann 4.0 - demonstrated on a SmartPower 25

On all exhibits shown at the 40th anniversary celebration of the Wittmann Group, networking of machines and peripherals was also implemented. A complete installation was performed on a SmartPower 25/130, the smallest model of the servo-hydraulic series. In this model, the new Wittmann Flowcon plus flow controller was also integrated in the machine. On this machine a ball filter was manufactured from PA using a 4-cavity mold supplied by Zimmermanntechnik (HK) Ltd. Hong Kong, which operates a production plant in Shenzen, China and maintains service subsidiaries in Germany, Austria and Mexico. The Flowcon takes care of closed-loop flow control as well as mold temperature control, which contributes substantially to improved product quality and production stability.

In addition to the smallest machine from the SmartPower series, the largest machine of this series was also shown in operation at the 40th anniversary celebration of the Wittmann Group. On a SmartPower 350/2250 an "organic sheet" component was produced with a single-cavity mold from Georg Kaufmann, CH. The mold was equipped with a hot runner with needle shut-off, an edge folding slider for in-mold forming of the organic sheet and a punching die to punch out an aperture in it. The automation system developed by Wittmann Robot Systeme in Nuremberg was custom-made for this application and came with a station to feed the organic sheets cut to size, a heating station to heat the organic sheets with heating elements supplied by Krelus, CH, and a multi-functional gripper with a needle gripper to pick up the heated organic sheet, and a suction unit for finished parts removal.

Finally, the Combimould process was demonstrated as well by making a drinking water closure from thermoplastic and silicone on a hydraulic HM 240/350H/350L with an 8-cavity mold supplied by ACH Werkzeugbau, using transfer molding technology. A W832 pro robot from Wittmann took care of parts removal and depositing.

During the company tour in Kottingbrunn, additional interesting machines and applications were presented to the participants. Moreover, the visitors were given an opportunity in Vienna to expand their knowledge about machinery and processes by a series of technical expert presentations. 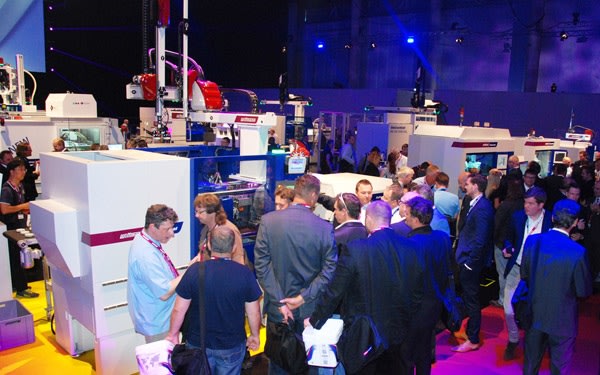