2016-06-13
Polish version
In 1976, the design and production of Wittmann flow controllers was the starting point from which today's Wittmann Group has developed. To celebrate its 40th anniversary, Wittmann invited its customers and business partners to the company's birthday party in Vienna on 8 and 9 June.

The history of the Wittmann Group is characterized by continuous growth in terms of both its corporate product portfolio and the group's geographic presence. In 1976, Dr. Werner Wittmann founded today's Wittmann Kunststoffgeräte GmbH based in Vienna to produce the flow controller developed by Werner Wittmann. Only three years later, the product range was extended by introducing Wittmann temperature controllers. In 1983, robots were added, followed by the production of dryers, material loading systems, granulators and metering devices. The takeover of Battenfeld Kunststoffmaschinen GmbH in Kottingbrunn, Lower Austria in 2008 was a milestone in the history of the Wittmann Group. By this move, the company's previous product range, consisting of robots and peripheral appliances for the plastics industry, was further extended to include injection molding machines. Major investments in product development and expansion of production facilities in the areas of injection molding machines as well as automation and peripherals, plus a global distribution network developed over many years, have made the Wittmann Group what it is today: an innovative, competent and reliable partner for its customers around the world.

At its 40th anniversary celebration, following a keynote presentation by Dr. Rüdiger Baunemann, Managing Director of PlasticsEurope Deutschland e.V., on "Key Driver for Sustainability" and an impressive show act, the Wittmann Group presented to its guests its innovative products on 8 and 9 June at the Viennese exhibition center Messe Wien. The exhibits included several absolute novelties.

Unilog B8 - the new generation of control systems

10 exhibits were on display in the area of injection molding machines. An absolute highlight was the introduction of the new control system generation for injection molding machines from Wittmann Battenfeld. The new Unilog B8 sets itself apart from its predecessor generation not only by its new, attractive design and its 21.5” monitor screen, but above all by simplified intuitive operation with a multi-touch screen. In addition to the soft touch function, however, Wittmann Battenfeld has also kept some hardware keys in its control system, to provide easy access to frequently used functions. The new control system was in operation on a machine from the all-electric EcoPower series, an EcoPower 110/350, on which a fuel cap was produced from PA in a 2-cavity mold supplied by Reutter, Austria. A Wittmann W818 robot handled parts removal and depositing. Two more exhibits were also equipped with the new B8 control system, a SmartPower 120/350 Medical and a MacroPower 1100/8800, which were demonstrated on a company tour in Kottingbrunn.

The EcoPower - ideal for medical technology applications and multi-component technology

With another EcoPower 110/350, Wittmann Battenfeld highlighted its expertise in the field of medical technology. On this complete clean-room production cell, equipped with a laminar flow box from Max Petek, Germany, the central pump component of the Respimat inhaler from Boehringer Ingelheim microParts GmbH, Germany was manufactured in PEEK. The parts and the sub-runners of the hot-runner were removed by a Wittmann W837 side-entry robot. After the disposing of the runners, the components were separated by cavities.

The EcoPower on display in the Viennese trade fair hall was a multi-component EcoPower model with an insider cell. On an EcoPower 180/350H/350V, a flange was produced from HDPE and PA using a 1+1-cavity mold supplied by Polar-Form Werkzeugbau GmbH, Germany. With the insider cell, the W821 Wittmann robot for parts removal and depositing, as well as the Wittmann temperature control system and a conveyor belt, were all integrated in the machine. 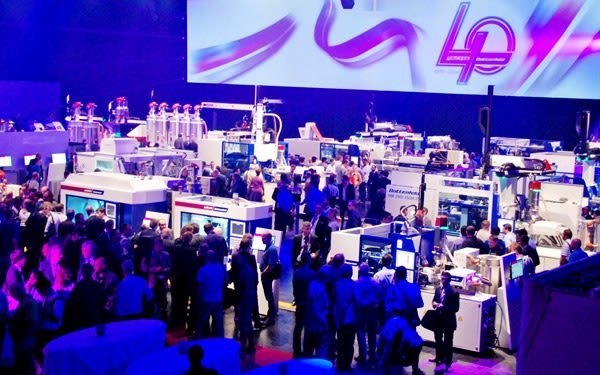