Wittmann Battenfeld with innovative momentum at the K 2016

True to the motto "be smart", Wittmann Battenfeld will present for the first time at the K 2016 the Combimould process (multi-component technology) on a machine from the servo-hydraulic SmartPower series. The SmartPower machines are currently available from 25 to 350 t as standard models and will be available with multi-component technology as well from K 2016 onwards.

On a SmartPower 180/525H/210L, a drinking cap made of thermoplastic and liquid silicon will be manufactured with an 8-cavity mold supplied by ACH Werkzeugbau, using transfer technology. Parts removal and depositing will be handled by a W832 pro Wittmann robot.

Another interesting "smart" process will be demonstrated on a SmartPower 240/1330. In this application, PP preform parts for a 150 ml flacon are injected and inflated inside the mold with a 2-cavity mold supplied by Grossfiley, France. The mold comes with an index plate and consists of 3 stations. In the first station, the preform parts are injected, in the second, they are inflated and then ejected free-falling in the third. The SmartPower series' generously dimensioned platen areas make it an excellent choice for multi-component applications. By extending the mold to 4 stations, the preform part could be overmolded with a second component to produce attractive multi-component blow-molded parts.

On all exhibits shown at the K, networking of the machine and peripheral equipment with Wittmann 4.0 will be implemented and demonstrated.

Smart production with individualization and transparency according to Industrie 4.0 principles is the theme of the SmartPower 350 on display. The highlight in connection with this topic will be a fully automatic and integrated machine of the servo-hydraulic SmartPower series, on which trade visitors will be able to witness live the production of individualized plastic parts.

On a SmartPower 350/3400, an attractive TPE shopping bag will be produced with a mold supplied by Haidlmair, Austria, which can be provided with a personalized imprint. At a terminal, all visitors can enter their names. To collect the bag with the personalized imprint, each visitor receives a printed voucher with a QR code, which can then be read in at the delivery station. After the QR code has been scanned in, the next bag produced will be separated and transferred to a station where it is laser-printed. After the fair, the production data of the "personalized bag" can still be retrieved by scanning the QR code for another fortnight. Handling of the bags will be effected by a Wittmann W843 pro robot equipped with the new R9 control system. 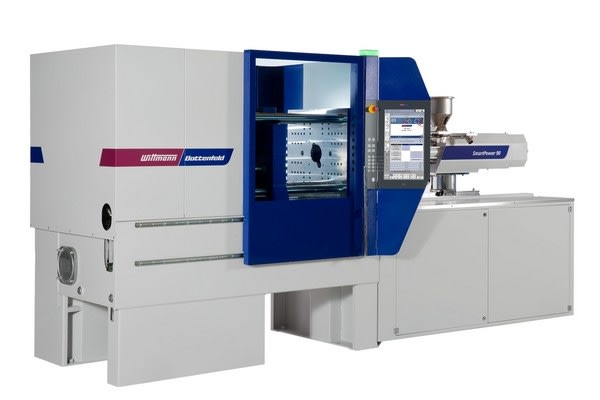